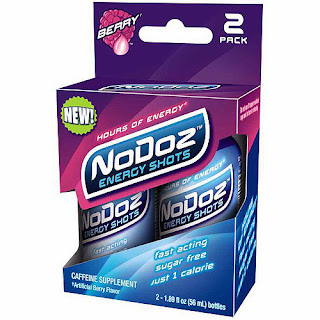 Though still technically an emerging product, chances are you and everyone else already know where to find NoDoz shots—Novartis is making Wal-Mart the focus of its aggressive marketing campaign, and if the brand name means anything (which it probably does), chances are that’s all it’s going to need…for now.

The colors are attractive, the motif is clean, caffeine content listed, no lame paragraph lauding the excellence of the product—but chances are most people aren’t going to care much about any of that.  If anything, it’s that prominent logo front and center that’s going to reel people in, and if that’s got them hooked, nothing else is going to matter.

I was actually surprised how well Novartis managed to pull this off—as many shots as I’ve had, I knew when I saw that this was berry-flavored that it would be prudent to brace myself for a really nasty 5 Hour Energy clone.  Taking a whiff after I got the bottle open, I was quite surprised to note that this actually had a pleasant berry fragrance—shots usually smell about as bad as they taste.  The second surprise came in the flavor itself—it didn’t taste half bad—I actually tasted berries, with minimal (for a shot) interference from the artificial sweeteners, etc.  It’s not something I’d drink every day for the flavor, but it’s absolutely one of the better berry shots I’ve had.

NoDoz tablets are, in a way, the original energy supplement, so it shouldn’t come as a surprise that the shots stick to their roots, toting 115 mg of caffeine, and that’s it—no B vitamins, no ginseng, no milk thistle or anything of the sort.  As for effects, you can expect a modest boost—you won’t be wired out of your mind and you certainly won’t be jittery; if you’re used to the likes of Monster and Rockstar it will certainly be unfamiliar territory and you might very well feel cheated.  People familiar with the tablets, however, will certainly feel gratified with the clean (and almost lenient) sense of alertness they proffer.  My advice: for a drive of medium length where you’re feeling somewhat tired or a late afternoon study session when you need to put a few in a few more hours before you hit the sack, hit the NoDoz.  For intense fatigue or a trip to the gym, look elsewhere.

Got somewhat less than three hours of energy out of this, no crash.

NoDoz is not my favorite energy product (or even my favorite energy shot), but I do appreciate it for what it is.  Longtime fans of the tablets: enjoy your shots.  Newcomers: it’s worth trying at least once.  Do so, and please, all, leave your thoughts on the matter.