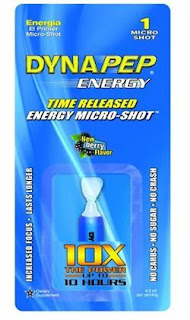 I got mine at a grocery store, but for the most part you find these sorts of things alongside the chlorophyll wonder pills and male enhancement shots at gas stations.

I’m really not sure what the idea behind being the “world’s first microshot” was, less now that I’ve actually tried the stuff.  I imagine that the initial rationale was convenience—I mean, how cool would it be if you could load your purse or pockets with teeny bottles of energy?—but really, there’s nothing convenient about filling your pockets with these big, clunky cardboard cards designed to contain these miniscule shots.  Second mark against convenience is the fact that it takes so much longer to get through than a regular shot—the opening you get from twisting the top of the flimsy plastic microbottle is hardly worthy of being called such; I would say it counts more as a pore.  And finally, the third mark against the convenience theory is the fact that once you’ve tried these, you never freaking want to ever have to do it again.

I’m pretty conservative with my rating system, I think.  I very rarely dole out an illustrious 10/10 for flavor, and even if your product is really bad, you usually manage to at least get at least one point.  If a product is especially noxious, it will get .5/10, but 0/10…you have to have something especially repugnant on several different levels to merit that.

That having been said, I have tried both shots available at the local Broulim’s store, and they were both repellent enough that I’m almost ready to think that they were toxic.  Egad, this was an awful experience….

The first thing I thought when the first squirt reached my mouth was that I had just ingested some sort of organic solvent.  You know the smell of acetone, or rubbing alcohol?  Well, that’s about what this tastes like, minus perhaps a burn.  Maybe this is what toluene tastes like?  Second mental observation was that I tasted plastic—yes, the essence of the bottle has steeped into the liquid, and once it reaches your throat the smell fills your nose.  Lastly, I noted that there was no berry flavor, but wait…after I had rinsed my mouth several times with water, it popped up—but it wasn’t good at all, and only went away once I brushed my teeth and used mouth rinse.

On the bright side, the Dynapep Company has a bright future in the production of berry-flavored emetics.  I’m sure they’ll taste better coming up than going down, because it couldn’t possibly get worse than this.

I had high hopes for this shot (most every review I’ve read has stated that they kick pretty well for only having 100 mg of caffeine), and I suppose in this regard they didn’t disappoint.  The kick is pretty intense and moderately jittery, which makes it good in the event that you’re going to be doing something physical—though I wouldn’t consume it if you’re going to be going to a meeting or school or something that requires you to actually sit still.

This microshot had some admirable sustain when it came to its energy; I felt the full effects for at least four hours after the fact—after which it tapered off in a fashion that could be likened unto a freefall.  Make sure you’re done with whatever you needed the energy for by the time the finish line rolls around, because you’ll basically be nonfunctional after the fact.

The energy’s good while it lasts, but it tastes so dang bad and crashes so hard that I would never in a million years recommend it.  To top things off, I paid $2.50 for this miserable shot of bile—and it was on sale.  This is one thing to avoid, to attempt to employ the cliché with full effect, at all costs.