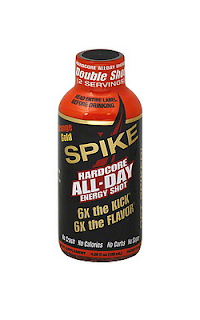 Great news—for the last week and a half or so, I’ve been getting myself un-addicted to caffeine.  It’s been hard, but I’m finally at the point where I’m no longer constantly craving something strong, and can usually get by with a glass of Diet Cherry Dr. Pepper in the morning.  It’s nice to not depend on a substance to be able to function after being addicted for so long.  Look forward to reading reviews from a non-addicted person in the future.

That being said, I did take this shot yesterday.  Not because I couldn’t function, not because the cravings were making me punch every person that walked past me, but because I had been up since 6:00 A.M., it was only noon and I was basically ready to pass out, and was experiencing that as I had long hours of remodeling ahead of me, without time for a nap.

In other words, I drank this because if I didn’t, I was screwed for sure.

As always, Spike knows how to make a product look imposing.  Not only does it tower above the bottles of 5 Hour Energy and the like in proximity to it (and next to which these look positively wimpy), but it’s covered in glossy black and jagged spikes and labels with fonts that appear to be intentionally foreboding.  In contrast to its only real competitor Redline, which looks like medicine more than anything else, these look strictly and appropriately bad*ss.

The first thing I noticed when I opened the mammoth 4 oz. shot bottle was the distinct aroma of orange Jell-O—something a little bit unique from an energy shot; when they are orange flavored the common trend is the aroma of orange cough syrup.  Tasting it, it was about what you’d expect based on the aroma—an intense, somewhat synthetic orange flavor, somewhat tart and appropriately sweet, with the artificial sweeteners being largely undetectable.  I didn’t like it as much as the original flavor, and afterwards there was an extremely distinct and persistent bitterness in the aftertaste, but it’s worlds better than most energy shots on the market.

Turns out that this was an extremely appropriate choice for my long hours of hanging drywall—and, actually, for the long hours of caring for my kids after the fact, and for the hour-long jog I had after that.  It isn’t, however, the sort of thing I’d recommend for anything less than an entire day of physical activity.  Don’t let the fact that it’s smooth and easy to get down fool you into thinking this is something you can slarg down without a second thought; it is easily one of the most potent energy products I’ve ever had, delivering a tremendous surge of energy within 15 minutes of drinking it (for those minutes before, I felt it building beneath my skin like a rising thunderstorm of energy), completely restoring my functionality and getting me as wired as I’ve been in a very long time.

I stopped paying attention somewhere past the seven-hour mark—though I suppose if I do the math, it kept me going on some level for about 12 hours.

Just for the flavor, I’ll be sticking with the original, but for a nigh unbelievable rush of energy, you can certainly count on this.  Just see to it that you don’t lose sight of the fact that this is a really hardcore energy product, and as such should be saved for the occasional time where you really need that sort of rush.

WEBSITE: getspiked.com (Worst.  Energy. Product.  Site.  Ever….All the more for the fact that it has literally been that way for years.)