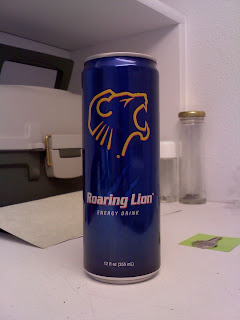 I’ve never been able to find Roaring Lion at any retailer I’ve visited to over the course of my travels, so plan on looking for a while if your modus operandi for energy drink hunting is casual browsing (mine is pretty active, and even then I had a hard time with it).  If you’re really anxious about finding it, order it off the website.

The can I procured as a sample from the Roaring Lion company appears to be a revamped version of the can I’d seen online (do a Google image search).  While the blue/yellow color scheme is the about same, the logo is more prominent, the scratches from a lion’s claws appear more realistic and are more of a background thing than they were before, and the lion’s head is pointed at more of an upward angle than on the previous can (this is an improvement in my opinion, as the original lion appeared more in pain [as though it had sat on a cactus] than roaring).  In addition, there’s a stroke of subtle design genius manifest in the bar code of the drink—a lion’s head is seen sticking through the top portion of the code, with the lines giving way as though they were bending blades of tall grass.  I consider that to be pretty clever.

While most drinks simply derive the Red Bull flavor and sell it as they would their own original concoction (perhaps hoping no one will notice, or maybe hoping they will…), Red Lion takes a more aggressive approach at getting their piece of the Red Bull target market and quite brazenly advertises itself as a “the #1 Red Bull Alternative”—a drink with a similar flavor profile (minus the medicinal aftertaste) and the same functional benefits (accomplished by having the same energy blend as Red Bull) as Red Bull, but at a significantly reduced price.  So…how does it perform in this regard?  I would actually say 'quite well'.  It possesses a more robust flavor than Red Bull, though with the same balance between sweet and sour and without the bitter aftertaste that plagues Red Bull.  I myself enjoyed it a great deal (moreso even than other Red Bull clones) and would love to see it become more widely available.  I’ve actually got kind of a hankering for a can right now….

Roaring Lion is powered by a standard caffeine content and a modest array of B-vitamins, which isn’t quite as extensive a blend as is offered in some energy drinks.  Notwithstanding, Roaring Lion provides a reasonable boost, perfectly suiting it for a long afternoon of studying or any similar application (if you're falling asleep at the wheel and need a more substantial boost, I recommend drinking two cans.).

I was actually pleased with Roaring Lion’s performance in this regard—not so much over the fact that it was particularly long-lived, but the fact that the effects were fairly constant until a few hours had passed, rather than peaking and rapidly diminishing into something less substantial.

All in all, I found Roaring Lion to be a satisfying energy drink experience, and really don’t have any problems recommending it.  As for whether it’s an adequate Red Bull substitute…well, my initial impulse is to say yes, but that’s going to have to be left to the Red Bull drinkers, one of which I am not.  Many of those who drink Red Bull have been doing so for a while (remember that Red Bull's the original energy drink), so I would imagine that anything other than that honest-to-goodness Red Bull would taste off, at least for a while.  I will say that it comes closer to being that Red Bull substitute, more so than any other such drink I’ve had, is at the very least worth a shot.