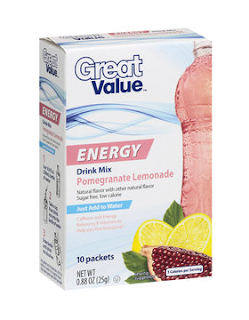 It’s Great Value—the Wal-Mart brand.  It’s about as omnipresent as the Galactic Empire—if you can’t find it, you’re obviously in rebel territory.

This is like any Great Value product—this is not something that draws you in from afar, something that intrigues you, nothing like that.  Unless you’re looking for it, you’re going to pass it over.  Fortunate for the continuity of the Great Value brand, everyone who buys their products knows what they’re looking for—a cheaper version of the other name brand stuff that Wal-Mart sells.  For those who do not know brand loyalty, there’s Great Value for everything from ibuprofen to tampons, to milk, to whatever the heck else it is you’re trying to save money on.  Seeing as this is the crowd you’re trying to draw in, there’s no reason to put a lot of effort into the look—and Wal-Mart does not.

The best I can say about Great Value Energy—Pomegranate Lemonade is that I can get it down without too much effort—but I cannot say that I enjoyed it.  I have never, in all my time reviewing, ever had something that tastes quite so fake.  Now, I do admit that the products that actually taste like the natural version of the things they say they are really are few and far between, but tasting real isn’t what I’m talking about here—most products are able to bury their artificiality in something, whether it’s the specific combination of flavors or the sweetener blend or what the heck ever, but in any case it’s not so up front.  With this, it’s all you can think of from the first swig—“this tastes fake.”  The pink lemonade flavor—fake.  The sweeteners—fake.  I swear even the coloring looks more synthetic than most—and that I can taste even that.  But if being able to taste the fake in every single detectible nuance of the experience doesn’t put you off—yeah, you might like it.  As for myself, I don’t think I’ll ever be going back to it if I can help it.

Consistent with Great Value’s previous energy product performance, this one doesn’t work quite as well as the name-brand product it’s competing with—in this case, Kraft’s Crystal Light.  Apparently the latter’s charging you more allows them to afford a higher grade of caffeine—or clumping agents; this stuff really doesn’t mix well unless the water’s hot, and it’s a pain to get the tap running hot and get just the right amount of water in there to dissolve it all—all that before adding enough ice to cool it down to the appropriate temperature, but not so much that you dilute the flavor into oblivion (not that it really matters in the case of Pomegranate Lemonade).  In any event, performance is just average—some alertness, some functional energy, no jitters.

If all you care about is cheap energy—then this is the way to go.  But if that’s all you care about, there’s a good chance you might not be reading this blog at all—you’ll just find the cheapest water enhancer you can on your next trip and that will be that.  So bag that and let me say, from reviewer to concerned consumer, that you can get so much better than this.  Crystal Light Energy—Citrus is my pick if you’re into packets and powders that you can mix into bottled water and what not.  This one, however, thoroughly earned its fast-track passage into my “pass over” list.