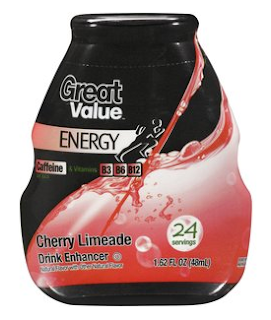 I can find the other flavors at every Wal-Mart I visit, but for whatever reason, I only see these at every other store…which isn’t a problem unless you live somewhere like the Appalachian Mountains.

I’m a sucker for bottles like these—so much energy in so portable a receptacle.  The design on the wrapper is obviously Wal-Mart brand, but I’m not so inclined to take points off just because it doesn’t look as nice.

Didn’t like this one quite as much as the others—the cherry tastes alright, the lime is a nice afterthought; problem I have with it is that both taste fake.  And no, I can’t really say that the other Great Value flavors were convincing, but they at least tasted good enough that I was willing got look past it.  This flavor just seems to embrace the fakeness—it’s fake, it knows it, and it doesn’t care.

If you’ve had the opportunity to compare both Mio and Great Value Energy water enhancers, you know about what to expect—Wal-Mart’s take works about as well as Mio in smaller doses, but the more servings you add, the less you get compared to Mio.  Significant doses:

Two servings (1 teaspoon) will administer 100 mg of caffeine; which should be enough to get you through most day-to-day stuff. 7/10

Three servings (1½ teaspoons) will give you 150 mg of caffeine—and a bit less energy than the same amount of Mio; think about what you’d get from most Monster beverages.  8/10

Four servings (2 teaspoons) will give you 200 mg of caffeine, and through that a thorough boost that will get you through most standard energy-requiring situations. 8.5/10

A few more servings will get you quite a rush, and that’s okay as long as you’re willing to drink all the water you need to dilute it enough to make it palpable.

Love the portability and versatility, but I’m really not all that wowed by the flavor.  Stick with other flavors from the brand if you like the value—or if you really want your water additive to be outstanding, get Mio Energy—Black Cherry.