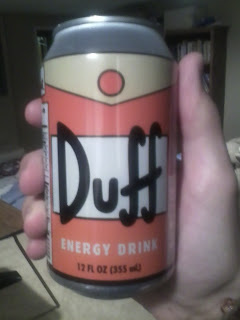 I suppose it serves me right—this is, after all, a novelty item, and I did purchase it at the local mall (Hot Topic, to be precise).  This review, however, assesses it as an energy drink, rather than as a collector’s item; so if it seems at any point that I’m being overly critical or nitpicky, I hope the reader will understand.

The only place I’ve seen this at local Hot Topic stores, though others I know report that it is also sold at Spencer’s.  Both of these stores are common enough, so if you’re really dying to get your hand on a Duff, it shouldn’t be too hard to do.

Simpsons nuts will doubtless go ballistic over the can—I’m just going to sit here and try and figure out why in the world they decided to take a fictional beer named “Duff” of all things and turn it into an energy drink.

No, it doesn’t taste like beer—at least I don’t think it does; I’ve never drank beer, but it smells a heck of a lot nicer than a guy who’s downed enough beer to intoxicate a horse.  It’s an orange-flavored drink, not nearly as good as Spider Energy, but still quite a bit more palpable than an orange soda like Fanta.  Think Metamucil, except a little more syrupy, and without the fiber.

Duff’s kick is lackluster enough that I can almost say it lives up to the name.  Ordinarily, I’d say “meh, it’s only got 110 mg of caffeine; I’ll let that slide,” but Golazo energy drinks have 100 mg, and still deliver the kick at least as well as most drinks with 160 mg or more—and one would never wind up paying more than $1.75 for a single can, and they have an orange drink that actually tastes good, AND said orange drink doesn’t have nearly as many calories OR HIGH-FRUCTOSE CORN SYRUP!  If I’m paying $3.75 for a can, company that puts out this drink, don’t you think you can afford to pay for a decent batch of pharmaceutical-grade caffeine that would make this “energy” drink actually WORK?!?

Effects come and go over the course of an hour and a half.

99% of people who review this blog will probably think I’m completely missing the point on this drink.  I don’t think that one should read all that much into it—I’m just grumpy because I was willing to pay for and review a $3.75 energy drink that didn’t taste all that great and didn’t really work.  Collectors—enjoy having a can/6-pack of Duff up for display on your shelf; I’m sure it will look great there.  But, in the event that you decide to drink one, don’t expect much.