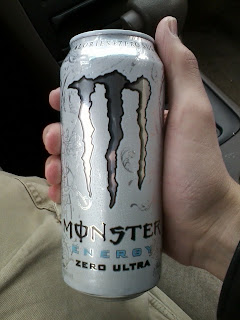 I’d be hard-pressed to think of anything energy-inducing/sustaining that looks so dang sophisticated; it honestly looks like they put out a white can and sent it to Smith and Wesson for some engraving.  The frosty white, the silver paisley and M are sharp enough to fit right into any formal occasion—and it also looks nice if you’re just pounding it down at your desk in khakis and a button-up shirt studying for an organic chemistry test.

If you’re into that sort of thing, it also looks nice to have an unopened can or two on your desk.  Just remember to ice it over before you drink it.

Reading over the story of how Monster Energy came up with the idea for Zero Ultra, I’ll admit—I started to think I was going to get yet another tiresome take on the original Monster flavor.  I was all pumped and ready to launch a multiparagraph rant that could be paraphrased as “how many freaking times to we need to freaking taste the same freaking thing over and freaking over again, but tweaked just a hair?!”  Then, popping open the can, I realized that it wasn’t going to be anything like that.  Not by a long shot.

Monster Energy—Zero Ultra doesn’t taste anything like the original—or Lo-Carb, or Absolutely Zero, or Assault, or Import, or Import Light, or Übermonster or M3, blah blah blah blah blah.  Zero Ultra is very much its own drink, that tastes (in my book) more than anything else like an extremely mellow lemon/mixed citrus flavor with perphaps a hint of blue raspberry thrown in there—almost like Xyience Xtreme Frostberry Blast, except perhaps more subdued and a bit smoother.

I really liked this energy drink, enough that I’ll be coming back to it often.

I admit that I don’t get the downing of the caffeine content here—I mean, it’s only 20 mg, but still, it makes a difference.  Ideally, a Monster Energy drink should really wake me up, just enough to call myself wired—this is what I love about the Rehab line.  Here—you’re just awake.  Not really jittery, not bouncing off the walls—just awake and functional.  Fortunately, downing two cans at once isn’t a chore and has since become my preferred method of indulging my Zero Ultra cravings, but for people who consume these regularly the extra cost for the boost might be a bit much.

Three hours with one can and five with two, no real crash.  Definitely drink two before any college-level exam.

When I first had this drink I thought it was good, but not really enough to be considered earth-shaking.  Monster Energy—Zero Ultra has since proved me wrong, and I’m happy to recommend one of my favorite Monster beverages to date for consumption.  As always, leave your thoughts in the comments below.