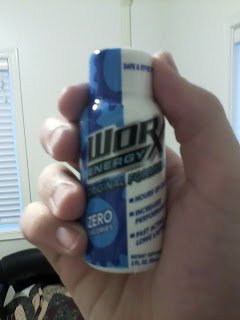 None listed on the bottle or available on the website; estimates place it at about 200 mg.

While it doesn’t quite approach the gross ubiquity of 5 Hour Energy, Worx comes in at a close second in terms of being the most abundant energy shot.  No difficulties in acquisition anticipated.

I don’t think there’s a whole lot to say besides “I like it,” if for nothing apart from a nice color scheme (mid-blues and white are always a winning combination in my book).  Moving on.

The flavor of this one is a bit tough to place/describe—I get the feeling I’ll be coming back to the shot more than once to try and pinpoint it.  In the meantime, the best I can tell you is that on the spectrum of fruitiness, sweetness, and tartness, it lies somewhere intermediate to the territories pertaining to citrus and berry.  Two things to note are the facts that it’s a relatively clean taste, and that the medicinal taste present throughout the entire 5 Hour Energy experience only presents itself towards the very end in the case of Worx, and then only briefly—which are both good things.  I can’t bring myself to say that I really like it, but at the same time I don’t think I can say that I really minded it all that much.

This is where I really came to like Worx—it got me wired.  Really, really wired.  Like, enough that classmates were commenting on it wired.  No energy shot I’ve had thus far has got me wired like, but seeing as I’m relatively new to the shot scene, maybe that will change as time goes on.  One thing is for certain, though—other shots are going to have to measure up against Worx from now on before I give them my stamp of approval.

Seems that I got about five and a half hours out of this—sans crash, no less!

It might not be something I go to frequently (many more palpable energy drinks offer a comparable energy experience and taste better), but this is head and shoulders above other shots I’ve had, and is a must-try if you’re into shots.  Watch out, 5 Hour Energy…you’ve got some serious competition.