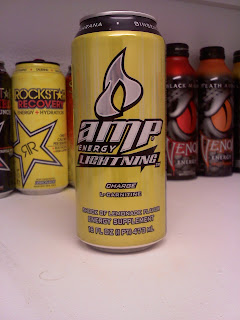 Amp Energy—Lightning is about as common as you could ask for, and can be found virtually everywhere.  There exists (though I can’t for the life of me figure out why) a sugar-free version which is similarly common, though perhaps slightly less.

Not every color looks as good on the Amp Energy design as the original green, and yellow is one of those that doesn't work so well.  The result of the attempt looks bland and lazy, as though whoever was overseeing the design couldn’t think of anything more inspired.

There’s hardly anything resembling a “taste” that I could comment on here.  The only semblance of a lemonade flavor came as an aftertaste (this, for the record, was pretty standard from what I’ve experienced with other lemonade-inspired energy drinks, which is to say, “unremarkable”), but everything else was completely overpowered by the presence of the carbonation.  As bland as this was, I shudder to think what the sugar free version is like….

There’s a kick, just not a great one.  I was awake enough to make the 2 ½, 3 hour drive from Twin Falls to Rexburg by night without too much trouble, but it seems to me that others of the line do more with their caffeine and own energy blend do more with what they have than Amp Energy—Lightning does with what it has.

The duration of the lift I got from Amp Energy—Lightning was about average, perhaps just a bit more long-lasting than it was intense.  Not especially impressive, but still not bad.

All-in-all, Amp Energy—Lightning is the textbook definition of...um...a word meaning "something that could be passed over without missing anything".  It has little to no taste to speak of, and every aspect of the kick leaves something to be desired.  Nothing to see here, folks.  Move along….