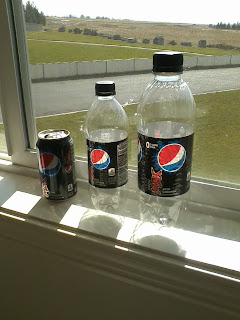 Yes, I know.  This is not “technically” an energy drink.  But I think it has earned the right to be reviewed as one.  If you are curious as to why, take a look at the caffeine contents—it is pretty apparent what they were going for when they made this stuff (I’ve included the caffeine contents of the corresponding sizes of the original for comparison), and I think they have succeeded.

You can get it pretty much everywhere—just look in the soda section.  There are so many varieties of Pepsi nowadays (some with truly asinine and nondescriptive names) that it’s easy to overlook Pepsi Max, but if you make it a point to look for it it’s easy to find.

I don’t feel like I have a lot to say in this section—it looks like the regular Pepsi, except for the big red “MAX” and the blue burst behind the logo.

For the record, I am not generally a Pepsi guy.  I got back from Guatemala in 2007, and since then it’s really bugged me when things are too sweet—if you’ve read some of my energy drink reviews, you’ve noted that I make it a point to say so when they’re too sweet.  Anyway, I just really couldn’t stand the original Pepsi because it was so freaking sugary, and it’s been a long time since I’ve had anything Pepsi-related.

That out of the way, this is good Pepsi.  It’s had the HFCS replaced by aspertame (so it’s really not healthy despite being low-calorie), which makes it light years less thick and easier on the palate.  I don’t have a clue how Pepsi fans feel about it—but as for myself, I didn’t mind

Drinking a 12 oz. can of Pepsi Max won’t give you what I’d call a tremendous boost—but it is far above average for your run-of-the-mill caffeinated soda.  It’s enough to deliver a bit of a pick-me-up and clear some of the cobwebs out of your head, but not a lot beyond that.

Hour and a half or so.

So as far as energy products are concerned, this is a bit below average.  But for a soda—it kicks butt.

It wasn’t until I go to this size that I really started to notice marked performance out of Pepsi Max.  Drank this bottle one afternoon I was studying and having trouble focusing—it woke me up and helped me get my organic chemistry done all that more quickly.

Two and a half hours or so passed before I felt that the drink had really worn off.

For a decent mid-range kick, a 20 oz. bottle of Pepsi Max will do you just fine.

Here’s where things really start to get interesting.  The 32 oz. bottle has 207 mg of caffeine—so about as much as a Full Throttle.  Mind you, the caffeine is much more dilute, but it still delvers quite well in terms of performance.  After drinking all 32 oz. on ice (felt so…American doing that), I really noticed quite a boost.  I was exceptionally alert, productive, and yes, jittery.  And, with zero calories in the bottle, I didn’t feel all that much guilt…but my liver probably wasn’t too happy with it all the same.

Three and a half hours, no crash.

So in the end, I was impressed with the Pepsi Max line overall, most especially this 32 oz. bottle, which delivered an excellent kick.  If you’re into Pepsi and like more of a boost out of your soda than the original gives you, Pepsi Max might be the way to go for you.

And yes, this marks the 300th product I’ve reviewed; I’m holding off on making note of it until next week, when I’m getting some samples in the mail from a company I’ve had my eye on for a while.  I’ll celebrate then.
Posted by Brandon J. Rose at 11:05 AM