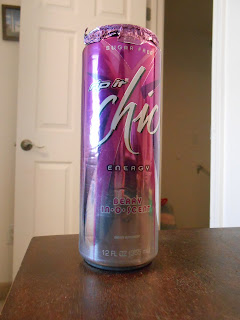 A special thanks once again to Big Red Boots, energy product reviewer of possessedbycaffeine.com, for providing this rare, discontinued energy beverage from his private stores.  Your contribution will not be forgotten, Mr. Boots.

Didn’t I just call this rare and discontinued?  Is further clarification needed?

In stark contrast with most Rip It energy drinks, whose energy drink cans could have been designed by a third grader, Rip It Chic—Berry In-O-Scent (I don’t get it either) looks like actual effort was put into it—yes, the sunburst is still kind of cheesy, and the print isn’t all that great, but the degree of color saturation and the foil top counterbalances the carelessness and gives the thoughtful consumer the impression that someone in the design department actually cared about what they were doing.

…After drinking something like this, you would hope, heck, you would think that there would be some sort of payoff in the energy department.  According to Rip It, ‘chick boost’ equivalates to ‘almost no boost.’

Two, two and a half hours tops.  No crash.

From my point of view, the world has lost nothing in the discontinuation of this beverage, and that’s my final say on it.  Guh, that tasted bad….