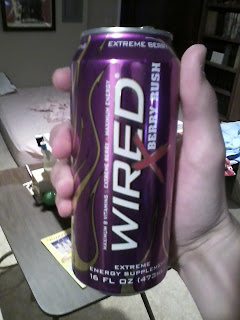 This is a relatively new beverage, and as such it is (at least for the time being) relatively uncommon.

Wired X Berry Rush has a generic, unconvincing, chemical-y berry taste.  The only thing noteworthy is the presence of the flavor of watermelon (curious, because last I checked, watermelon wasn’t a berry—correct me if I’m wrong, botanists).

Kicks alright, but for the most part, it consists of jitters (courtesy of the large quantity of b-vitamins employed in the proprietary blend).  Personally, I like my energy drinks to have a little more substance to their kick, so X Berry Rush left me feeling pretty unimpressed.