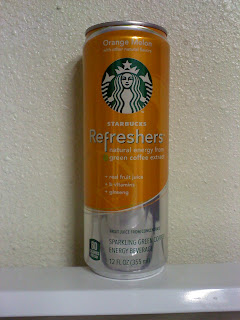 There are only so many ways I can say this (I just finished my reviews for both of the other Starbucks Refreshers drinks)—unless you know where to look, you probably won’t find any Starbucks Refreshers beverage at your first shopping stop.  The next, however, will probably be another matter.  This is an emerging energy drink from a big company, however, and we’re bound to see it everywhere soon.

I like the way this one, with its orange, looks more than Strawberry Lemonade’s redish-pink, but still—that dang silver band at the bottom of the can mars an otherwise passable package.

I enjoyed the flavor of this one a little more than the others—the orange melon is just alright (maybe just a bit unremarkable), but what I liked about this one was the fact that the excessive sweetness from the stevia was very much muted.

I feel about the kick from this drink as I did about the kicks from the others—it’s there, it’s recognizable, but really not very impressive.

You’ll get a 2-hour boost out of this beverage.  Ordinarily, that would be something, but given the weakness of the kick, it’s nothing at all impressive.

Tastes alright, but the kick kind of makes me feel annoyed just writing about it.  I’m okay with a drink that’s not exceptionally strong, as long as it’s good for something—for example, the 10 oz. Bawls Guarana gave me just the right amount of energy to function for the rest of the day after waking up from a nap that left me feeling pretty groggy.  With Starbucks Refreshers—Orange Melon (or any of them), I have a hard time deciding what situation I’d use them for—there’s just so little to work with.  Coffee drinkers—stick with your coffee.  Energy drinkers—stick with your energy drinks.