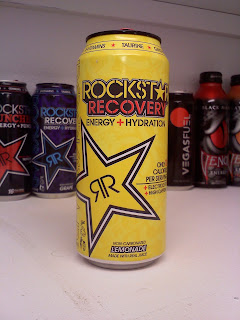 By and large fairly easy to come by; stores that carry the original but not this one are few and far between. 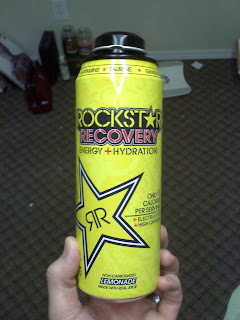 This one’s got a pretty dang nice look to it—black and red lettering, yellow star, and the diagonal “Rockstar Energy” background in two shades of yellow.  It’s the kind of thing that one would think that lemonade should come in—holding either size of can, I can’t help but think, “FREAK YES!  PIMP LEMONADE!”

First time I drank this, I wasn’t terribly impressed—but then again, it wasn’t terribly cold, either.  Second time around, I bought one fresh out of the refrigerator—and I found it to be relatively pleasant.  Not quite on the same level as Monster Rehab—Lemonade, but still superior to Wired X Lemonade.

The kick produced by drinking Rockstar Recovery—Lemonade wasn't so much manifest as an “In yo’ freakin’ FACE, homeboy!” sort of kick that I'd gotten out of others as it was a significant increase in performance capacity.  Lifting weights after having drunk it was a breeze, as was my four-mile run after the fact, but I never really felt particularly jittery—which, honestly, is okay.

Not as long-lasting as some (3½ hours or so), but still nothing to sneeze at.  No crash afterwards, either, which is always a plus.

When all is said and done, the 16 oz. Rockstar Recovery—Lemonade is a decent energy drink overall.  It should be sufficient in most energy-requiring scenarios, and the only word of caution I offer is that the partaker ensure that they drink this exceptionally chilled (anyone who's ever drank lukewarm Crystal Lite should understand why).

If jitters are what you’re after, then Rockstar’s 24 oz. Recovery—Lemonade is a good option.  Drank it for a headache I was experiencing when I was about to embark upon a 5-hour car ride—as a passenger.  It suffices me to say that the drink did it’s job—the headache went away, and I sat in a crew seat, very uncomfortable as I bounced off the walls with no real outlet for the formidable amount of energy I was experiencing.  Do yourself a favor—drink this before you do something that will involve moving—lots and lots of moving.

Drink lasted for at least the 5 hours of the car ride—which earns it the high score, but once again, given how wired I got, it made for quite an uncomfortable car ride.