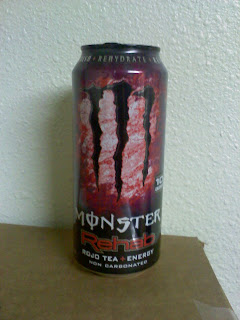 Like all of the more recent additions to the Monster Rehab line, Rojo Tea is harder to find than the original Lemonade flavor, but still not difficult to come by; one only need look around a bit.

There’s really not a big difference between the packaging in different drinks of the Rehab line.  Black Monster M, chaotic background of some sort, unique color scheme.  This makes it really hard for me to say anything other than, “HEY!  Rehab—Rojo Tea looks almost identical to the other Rehab drinks, except it’s red!  And the red’s really cool!”  So there you have it.  The most unique thing about Rojo Tea’s look is the color scheme, but given how tight the Rehab schematic is, I am perfectly alright with it.

Here’s where I get enthusiastic, because Monster Rehab—Rojo Tea is hands down the most refreshing energy drink I’ve ever had.  The taste isn’t all that complex, but it’s a little bit hard to describe…it reminds me a bit of hibiscus tea in that it’s tart, earthy, and somewhat fruity, except there’s no hibiscus tea in it, so I’m attributing the flavor to the rooibos tea and the cranberry, and perhaps the goji berry extract.  In any case it is a supremely delicious drink, and ought to be a first pick in the event that one finds themselves feeling 1) lacking in energy, and 2) particularly thirsty.  I’ve always been skeptical about the idea of a hydrating energy drink, given caffeine’s nature as a diuretic, but after tasting this…my mind is at least open to the possibility.

I didn’t find myself quite as wired with this one as I did with Protean, but it was still a pretty effective drink, enough to get me significantly awake and noticeably jittery.

One thing that Rojo Tea did have in common with Protean was the tapering off into a less remarkable kick that lasted for most of the time I was experiencing the effects, but it still worked well enough that I could go about the first four hours of my workday without too much difficulty.

Monster Rehab—Rojo Tea is second to none as a restorative energy drink.  However, it’s also got the kick to speak for it—it effectively energizes but does not go overboard, and in doing this refrains from overwhelming of the drinker.  In any case, it fits extraordinarily well into its projected niche, and should be a first choice for consumers seeking for a drink that will abide by its claims to “refresh, rehydrate, and restore.”