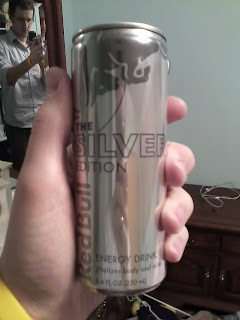 Depends on whether you ask Red Bull (who claim that it is limited in its distribution to exclusive clubs in a small number of large cities across the country) or 7-Eleven (who claim that the drink is only available there).  I don’t go to clubs in New Orleans or Los Angeles or places like that, and unless you do, I recommend you take your chances at 7-Eleven.

I appreciate the way Red Bull has gone with the design in these new cans—it would look really boring if they did the same old can in different colors.  I am not quite as wild about the two shades of grey or silver on this can; it has the unfortunate propensity to appear drab next to the Red and Blue Editions.

Well, I have high hopes for The Silver Edition.  The Red Edition was excellent, and The Blue Edition’s going to have me revising my Top 10 list once I get through these next couple of reviews.  I’m anxious to see how Red Bull does lime (would have been cool if it had been silverberry—which, yes, is a legitimate berry).  I pop the top and pour over my glass of ice the slightly cloudy liquid that smells strongly of citrus—so far, so good.  I take a sip, and…

No, it’s nothing revelatory.  But it does taste alright.  Good enough, perhaps, that I would recommend trying it at least once—maybe it will do for you what The Blue Edition did for me.  But from my point of view, this just isn’t up to par with the rest of the Editions.  I’m glad I tried the others first, because if I hadn’t, this would be a bona fide tirade.  But knowing what Red Bull is capable of, I’m feeling a little more lenient, and I think I could say that I would drink it again if I get the chance.

Same as any 8.4 oz. Red Bull product—it’s a great choice for a minor boost; The Blue Edition is now my go-to beverage for such.  But if you’re feeling lime more than blueberry, The Silver Edition will give you the same results.

Two and a half hours, no crash.  Not shabby in its appointed niche.

I’m not thrilled with The Silver Edition, but that’s just because I was so thrilled with the others that it seems shoddy by comparison.  Standing on its own, however, The Silver Edition isn’t bad—not by a long shot.  I will recommend it, and am going to leave it at that—except to ask that you leave your thoughts once you’ve had it.