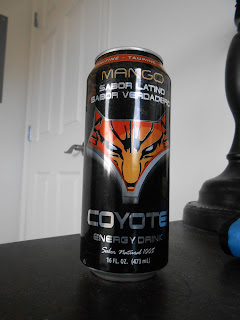 Again, I got these as samples, so again—no idea.  I know the company is based out of Indiana, so if you’re dying to try these you could make the trip there….

I would say “no need to go over this again,” but this is my last chance to come up with something witty to say about the coyote on the can—something I wouldn’t care so much if it weren’t for the fact that I think that the bad*** coyote is something very befitting of an energy drink, in particular one that looks like the subject of the film The Hound of the Baskervilles 2250 A.D.  Cool design aside, this hits the right notes with plenty of Spanish text and the caffeine content listed.

Ever had a mango soda?...me neither, actually.  This is about as good as I imagine them getting, however.  While the sweetness of these drinks (courtesy of cane sugar rather than HFCS) seemed a bit out of place with the Jamaica and Tamarindo flavors, it actually seems rather appropriate here (ever had a good, juicy mango?), and while it’s not quite a match for the real fruit, it tastes enough like it that I’d be more than happy to make these an occasional indulgence if they became available nearby.

Why only occasional?  Honestly, because of the sugar content.  I’m glad they elected to use sucrose as the sweetener rather than fructose, but it still makes for a really jittery ride unless you’re planning on burning it all off right after the fact….

…Which I honestly recommend, because otherwise you’ll crash hard after the three and a half hours of sugar-fueled energy pass.  As I’ve said, though, burn it off, and you’ll be crash free!

I have to hand it to Coyote for putting effort into their beverages—while most new companies are contenting themselves with Red Bull clones and crap fruit punch, Coyote has put out a line of three delicious flavors (with more on the way, hopefully) which stay true to their Latin inspiration and provide a decent boost in the process.  I’d love to see this company go somewhere, so buy up!