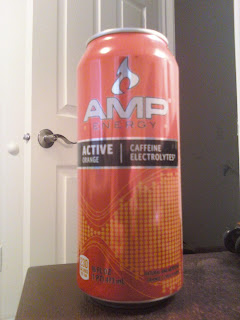 This one seemed to appear overnight—one day I had no idea it even existed, the next I’m seeing it at gas stations, grocery stores, etc….almost everywhere but Wal-Mart and the Amp website.

Amp makes a good-looking can nowadays, much cleaner than their previous getup.  I can’t help but like the simple, clean cut design with orange with black; I saw it from across the gas station and it had me reaching for it but seconds after the fact.

Now, I know what all of you are wondering—is this a recontinuation of the long-discontinued Amp Energy—Relaunch (which discontinuation seemed to piss a lot deal of people off)?  My answer is “kinda.”  It tastes a lot like what Mountain Dew Live Wire would taste like—kind of a heavy orange soda with a cleaner taste and better balance than most, like Fanta.  If this sounds like Relaunch to you, then you might be very happy to see this in stores.

In all honesty, though, I didn’t like it that much.  Amp seems to want you to think that its Active beverages are the rehydration/anti-fatigue drinks of the line, possessing both caffeine and electrolytes.  Well…turns out the electrolytes were added for taste, so I’m not so sure how hydrating it would be, and in any case, the last thing I would reach for in the event that I needed to rehydrate and get a jolt of caffeine is this one—it’s heavy, it’s overly sweet, it’s heavily carbonated, and it’s just not that pleasant; it’s the sort of thing that makes you feel dehydrated after drinking it (I could expound on the whole osmosis thing, but probably not necessary on an energy review blog…).  So if you’re thinking about it for rehydration purposes, don’t get duped.  Check out my reviews for the Monster Rehab line, or even better still, Rockstar Recovery—Energy/Tea/Lemonade.

This is everything you expect from a really sugary energy drink with an average caffeine content—mid-range and jittery.  Really, I’m not all that impressed.

The drink lasted for three hours during which I maintained a fairly steady level of energy.   But once the end rolled around, I became completely useless.  The crash was horrible—even more so because I had drank this early in the morning, and still had much to do.  So, if you like this drink, okay.  But be smart about drinking it; don’t even think about it if you need to be productive for very long.

I can’t argue with you if you’re crazy about orange soda energy drinks, but honestly, I really didn’t like this one.  On top of not tasting all that great, the buzz was pretty mediocre, and the crash served only as the straw that broke the camel’s back in my book.  I’d shy away, but that’s just me.  By the way—if you loved Relaunch, and have had the chance to try this, let me know what you think.  It’s been too long since I’ve had the former to make a legitimate comparison, and I think readers would appreciate one.