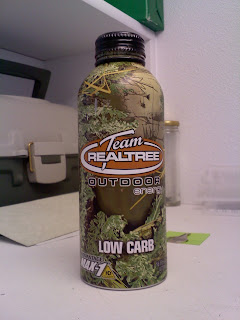 Any Team Realtree product is more likely to be sold at specialty stores than anywhere else, and their energy drinks are no exception.  I bought all of mine at Sportsman’s Warehouse, and outside of their stores, I’ve only seen them once (at a gas station in Montana, which actually kind of makes sense, given the theme).  Good news if you live near a Sportsman’s Warehouse or other such store, bad news if not.

I’ve always liked the packaging on Team Realtree’s energy drinks.  The original evoked a nostalgic sort of feeling within me (I grew up in New England, and am quite comfortable in a forest setting), and I at least respected what the company was trying to do with Blaze Orange and White Buck.  I can’t truthfully say that I dislike the design they opted to put on their Low Carb variant, but I don’t know that what appears to be a muddy lake in the middle of a coniferous forest was the best woodland scene they could have picked.  That aside, I love the thick aluminum bottle with the resealable cap, and wish that more energy drinks would pick up on that.

Given the fact that in times past, most beverages labeled “Low Carb, Low Calorie, Zero Calorie, etc.” have been variants of a sugared and otherwise identical beverage, it kind of came to me as a surprise that Low Carb was a unique drink, bearing no resemblance to the original.  The taste?  Cream soda.  If you like cream soda, more power to you, but I really hate cream soda.  To me, the idea is flawed in the same way meat ice cream is flawed—you have meat, and you have ice cream, but you don’t mix them.  Same goes for cream soda—you have cream, and you have soda.  Mix them and the result is a “what the FRICK is this?” kind of experience.  If this were all, I might be a little more forgiving, and even say “if you like cream soda, feel free to discard everything I said and enjoy your Team Realtree Outdoor Energy—Low Carb.”  Alas that this is not the case…the drink possesses an aftertaste that is quite offensive (very bitter and acrid), almost reminiscent of my experience with Rockstar 2X, and I doubt even you cream soda lovers could stomach that.

However much of an ordeal it was trying to get it all down, Team Realtree Outdoor Energy—Low Carb is rather effective.  I was particularly pleased with how fast-acting it was; I drank this just before heading out to class, and once I was there (about 15 minutes later), the maximum effects had already set in.

Usually, the more potent a drink is, the longer it will last.  Though there are exceptions to this rule, this drink is not one of those.  It will provide 3-3½ hours of solid energy, after which its effects simply diminish without a crash.