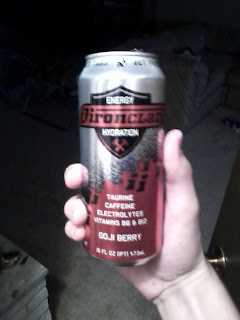 I’ve heard good things about Ironclad, so it came as a surprise when it turned up at Big Lots this last week.  For those of you who are unaware as to why I would find this paradoxical, allow me to educate you: Big Lots serves as a sort of energy drink graveyard.  While I’ve had the occasional good find there, (i.e. the highly underrated Monster Energy—Heavy Metal), it is largely stocked with drinks that range from the mediocre likes of the True Colors and Rip It lines to colossal failures like X Games Energy and Buy This Energy Drink, Help Kids—Lemon Lime.  As I did with all those, I bought both flavors of Ironclad that they were offering there and am here to report to you on the first.

Fairly uncommon for the time being.  Not sure if that will be changing.

Ironclad—Goji Berry has some good things going for it in terms of packaging—I like the insignia, and I like the generally tough look of the thing, which makes it appropriate for a gym setting (this is, after all, a hydration drink).  Fact of the matter remains, however, that I don’t like bare aluminum.

Popping open the can, I decided to take a whiff and see if I could ascertain what I was getting myself into.  After the first sniff, all I could think was “ah, crap”—it really didn’t smell all that good; kind of like fermented berries if anything.  Taking a sip, however, produced a very different experience, and the smell did not interfere in the least (contrast this with NX—Speed Freak or NX—Lean & Mean, which both made me feel like I was getting rotten mango pulp shoved up my nose every time I tried to drink them).  The flavor is complex—kind of a slightly earthy cranberry with less tang and a hint of cherry.  It was a light and refreshing experience; whatever the reason for its showing up at Big Lots, it’s not because of the taste.

Kick is fairly stout, considering the caffeine content.  I found it to be a solid, productiveness-promoting sort of boost, more than enough to help you get lots done around the house, and excellent for a trip to the gym for some lifting.

In a fashion similar to the Monster Rehab line, the peak lasted about an hour, after which there was a tapering off to a lesser energy level.  Total time amounted to somewhere south of four hours.

I hope that its appearance at Big Lots doesn’t actually spell the end for Ironclad—Goji Berry, because I frankly think it deserves a widespread clientele.  It’s refreshing and it’s effective, and I recommend it without hesitation.