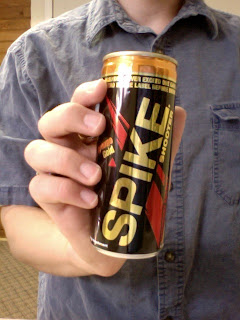 As long as you live 1) in Washington State, and 2) by a 7-Eleven, you should be able to get your hands on this.  Otherwise, experience tells me that you’re probably out of luck.

Spike products mean business, and you can tell just from the look of it—with bold colors, jagged spikes, and warning labels covering every available surface, it’s not difficult to figure out just what you’re getting into.  I prefer the reds and golds of The Original to the oranges and yellows of Orange Gold, but this can is otherwise every bit as effective as the other.

It is quite easy to tell that with Spike, the chief concern is energy—everything else can take a back seat, including the flavor.  If it tastes good, okay…but if not, at least it’s still loaded with singular amounts of energy.  Orange Gold’s orange flavor seems to have been added as an afterthought—sort of a “Hey!  Now that we’ve got the formula figured out, we should probably give it a flavor or something!” sort of thing.  It’s recognizably orange, but not especially palpable.

The blast of energy I got from drinking this small can came on much in the same way a thunderstorm does—I could feel that something big was going to happen well before I actually experienced it.  When it does hit, it hits really hard—not as unforgiving as the 16 oz. can, mind you, but enough to earn an admonition of caution for any considering it—you don’t want to drink this casually.

The really serious energy lasted me a couple of hours, after which it diminished somewhat—but not so much that the shakes went away; those were there for quite a while.  In the end, I was energized for about seven or eight hours—long freakin’ time.

In terms of performance, Spike Hardcore Energy—Orange Gold has few peers.  Taste does leave something to be desired, but if all you’re after is serious energy—this is definitely an option.