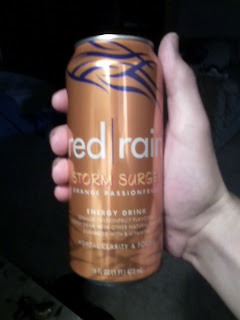 Another Dollar Tree acquirement.  Check there.

I like that the orange of Storm Surge is flashier than the red of the original (which almost faded completely into the background on the shelves), but as a whole it’s still not all that impressive (incidentally, I still don't get the pinstripes).

I wasn’t wowed by the taste here.  Passion fruit serves as the primary inspiration, though there are muddled hints of orange and maybe mango—almost like Amp (which I was not fond of either), except not nearly as sweet.  It’s the sort of thing that made me wish I had a NOS.

Storm Surge delivers a decent, mid-range kick—the sort you’d look for if you were tired (but not exhausted) and needed a moderate boost.  Its use is therefore limited, but plenty adequate for those circumstances.

Three hours or so passed before the caffeine wore off, after which there was a mild crash, though not a deal-breaking one.

As I said, I’ll be sticking with NOS, but if you’re looking for an inexpensive alternative to Amp, give Red Rain—Storm Surge a whirl.