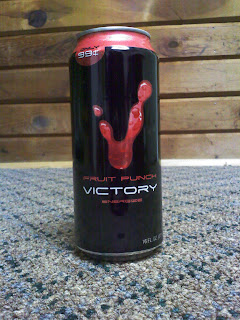 All I can do is guess—none is listed.  Probably 160 mg or so…that would make a lot of sense.

Scarce, but I don’t think that’s going to be the case for long.  I’ll probably be seeing this in more locations than I care to before long.

The only thing I hate finding more than yet another Red Bull clone is finding yet another crap fruit punch drink.  Whereas I actually don’t mind the Red Bull flavor and have actually had some excellent flavor experiences with Red Bull clones, crap fruit punch drinks are at best merely drinkable.  For the most part, they’re overly sweet, fake-tasting, and downright mediocre.  There’s no justification whatsoever for the multiplicity of these beverages on the market, but here we are with yet another.  Even by crap fruit punch standards, it’s pretty shoddy—not so much sweeter than others, but even more fake tasting and somehow even more generic.

And now, after tearing down the flavor, I’m forced to admit—this stuff works.  And it doesn’t just work—it’s nice.  I enjoyed buzzing under the influence of Victory Fruit Punch—I enjoyed the sharp alertness, I enjoyed the jitters, I enjoyed how it didn’t taper off until about…never mind; I’m getting ahead of myself.  On to the next section!

So, as I was saying, Victory Fruit Punch’s boost didn’t taper off over the course of the five and a half hours I was under its influence—the energy peak was more of an energy plateau, which only began to taper off once I passed the five-hour mark.  No crash to report.