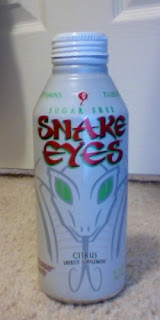 Located exclusively at Holiday Station stores, the locations of which appear to be curiously limited to northern states.  Maybe they’re still sore about the civil war…never mind the fact that several of those states didn’t exist in civil war times, if I remember my 5th-grade history lessons correctly.  If not I don’t particularly care.

Bare aluminum typically suggests sugar free…but white?  Doesn’t seem to be an entirely intuitive choice to me.  If we’re going by the color alone, I almost expect something along the lines of Slap Frost—you know, a Red Bull clone, but with notes of menthol in there to deliver a cooling sensation.  But having indulged in Snake Eyes products before, I do know better….

The taste here is advertised as “Citrus”—but is, in fact, a Red Bull clone.  My guess is that the company got their hands on some cheap energy drink syrup, and after lengthy deliberation said amongst themselves: “You know, none of us really know what the %&$# this is supposed to be…so let’s not waste any more time talking about it and call it citrus.  That’s as good a guess as anyone’s, right?”  Needless to say, the experience has had the effect of making me even more cynical regarding Red Bull clones—Holiday Station stores think it’s citrus, Blue Sky thinks it’s mixed berry—everybody is churning these things out like they’re going out of style, but nobody knows what the heck it actually is, and maybe don’t even care.  In any case this is a pretty bad clone; notwithstanding the fact that it’s sugar free it still tastes pretty syrupy and gross—not something I would really think about revisiting.

Like the other Snake Eyes beverages, this one is pretty weak stuff—and that’s saying something; usually the sugar free drinks work better for me than their saccharine counter parts.  Not here, though—it may have helped me not fall asleep on the way back to Rexburg from Twin Falls, but I didn’t really feel all that much more awake or alert—just there.  It’s a pretty unpleasant spot to be in, when you really need to be concentrating on the trip but just feel like you’re hanging in there.

Two and a half hours passed before the effects wore off—which would have been fine if it was my wife and I driving alone like we used to, but now that we have two kids that have us stopping every 45 minutes or so…it just wasn’t enough.

Looks bad, tastes bad, works bad…yep, this is a bad drink.  Don’t let the look of a previously unsampled energy beverage get you excited—nothing to experience here.  Move on.