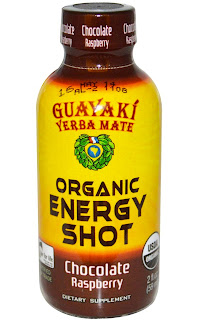 I found this one at Fred Meyer—one of their larger locations, specifically; if you live in a relatively large metropolitan center chances are you can find it without too much difficulty.  I don’t recall having seen it anywhere else, even at ours in Idaho Falls.  But then again, it has been a while since I checked there….

And here I was, thinking the bottle with the lime tangerine flavor was pleasant.  There’s just something about the extensive brown trim in conjunction with the yellow of the bottle and the idea of the chocolate raspberry flavor that’s appealing—looking at it, I confess, made my mouth water.  And, of course, there’s also the immaculate appearance and the care taken to package this in a brown glass bottle that speak for it—all work together to make me feel pretty excited about this experience.

Chocolate raspberry—how appetizing is that?  How awesome would this shot be if Guayaki really nailed it here, doing away with its previous lousy track record to put out a product that’s really freaking delicious?  I suppose you could say that it has—if, that is, you’ve spent all these years looking for an energy shot that tastes like super earthy, somewhat bitter prune juice.

I’m not exaggerating here.  Like the lime tangerine shot I had previously, there is really no intimation of the flavor of either advertised food product here—except, however, the vaguest semblance of raspberry aroma you can almost detect after you swallow.  Other than that, it’s all Amazonian liquid dirt (it even looks like mud in the glass), laxative fruit juice, and caffeine.  It’s a real shame to get the impression that Guayaki is shooting for such lofty heights in this department only to settle with something that fails so miserably.  And really, there’s no reason for them to do so—I’ve had plenty of very delicious, all-natural, organic, kosher, fair-trade certified, etc. foodstuffs.  Health doesn’t have to be so torturous, and it’s lamentable to see the apparent enjoining of the philosophy that such is really the case.

In my book, you’re better off spiking a small glass of prune juice with some of that 5150 caffeine additive—that way you at least get your energy with the benefit of some enhanced digestive flow.

I have to say, though, I appreciate this energy shot for the energy aspect of it.  All of my previous Guayaki experiences have involved more of a need for passive alertness than anything especially physical—not so here.  Tonight, this served my need for some pep during a late night run—and worked marvelously as such.  I can’t remember the last time 50 minutes of cardio have gone by so smoothly—but there you are.  It was after 10:00 P.M., and there I was, on the mean streets (scoff) of the suburban Tri-Cities area, running quickly and effortlessly while all the while singing aloud songs that ranged from “Down to the Old Pub Instead” to “Tyranny of Steel.”  For the low-key stuff these shots are just okay; it’s in the workout domain that they really start to shine.

As with previous Guayaki products, the initial burst of energy is nice, but doesn’t last terribly long relative to the overall longevity of the product—those initial effects lasted me about an hour, after which I settled into a more muted nonetheless alert state for the next hour.  Then, for the last hour, I gradually became sleepy again.  Still not too bad.

I will not recant my statement that these shots literally (and yes, I use that word with full knowledge of its meaning and abhorrence for its constant abuse) taste like dirt, but for a workout, I find them to have a very nice boost—even if regular consumption for such constitutes abuse towards one’s wallet.  Try it if you must; leave your thoughts.

KEYWORDS: Guayaki Lime Tangerine energy shot review, all natural, organic, kosher, fair trade certified, and whatever other qualifications you can come up with
Posted by Brandon J. Rose at 1:06 AM