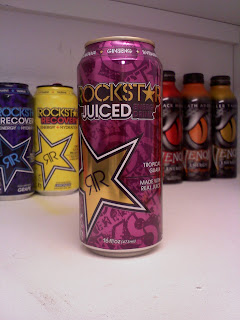 I’ve always been of the mindset that purple has the ability to make things look snazzy, and looking at the packaging of Rockstar Juiced—Guava, I can’t help but think that I’m right.  The basic Rockstar layout is followed, but in the background, you’ve got a sort of chaotic repetition of the Rockstar Energy logo running diagonally in two colors of purple, which, combined with the gold star and lettering, makes for an exceptionally pimped-out design.  Such are my feelings for the look that I’ve gone so far as to designate the beverage “my little purple friend.”

Rockstar Juiced—Guava is quite delicious, far better than most of the juice-inspired drinks I’ve had.  The taste of the guava is subtly but pleasantly fruity; not too sweet, not too sour, and exceptionally easy to down quickly.

The kick produced by this drink was more than adequate—not the same super intense, jet fuel-inspired blast of energy produced by the original and Rockstar Energy Cola, but enough to produce jitters characteristic of an unmistakable kick.  Still yawned throughout, but never once felt the least bit tired.  It was a curious sensation, that.

I found that Rockstar Juiced—Guava delivered about as well as you could ask for in the “keep you going” department.  I imagine it would meet the demands of all but the longest of energy-requiring scenarios.

“More than adequate” sums things up nicely.  This one tastes fantastic and is plenty strong, if not as hardcore as some.  In the end, I can’t think of any reason why one shouldn’t at least try it out.  If you’ve got the urge (or even if you don’t), I'd say give it a go.