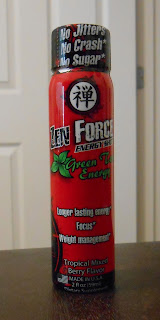 It’s not everyday that one runs into the founder of an energy product company, but that’s exactly what happened to me a couple of weeks back when I went to the local Broulim’s one night to get a few things for dinner.  I caught Jasen Lavoie just as he was taking down his display near the exit, and after shooting the breeze for a bit (we’re both from New England and would rather not be living out West, where it’s all desert-y, tree-less and far less humid than we would like) he was kind enough to provide me with samples of each of his products.

What I didn’t tell him was that I am the administrator of this site and the samples he so generously gave me would become subject to public review—which wasn’t the most honest thing in the world, I’ll admit.  Fortunately, it works out very well for him, as the shots performed very nicely indeed….

Probably not the highest in the world—my guess is around 100-120 mg.  Nice thing though is that it’s caffeine from green tea, which at least feels different when I drink it vs. the anhydrous stuff most drinks have.

Emerging gradually—easy enough to find here in small-town Idaho, but you may have to wait a while if you live outside of Idaho, Utah, or Hawaii (!).

The first thing I really have to say about this shot is that it looks freaking cool.  I love the tall bottle, I love the bold shade of red, and I love the clean, focused appearance.  I spotted this from about 50 feet away, and was almost immediately drawn in.  Kudos for the packaging.

I’ve had the chance to try Zen Force before (back when it was called Zenergy), and I honestly thought it tasted okay, though I couldn’t help but think that it would have tasted even nicer on ice.  Well, with the sample Mr. Lavoie provided, I decided to do just that—I stuck half an ice cube in a shot glass and poured this over it.  Once it had a chance to chill, I took a swig, and can confirm that if you are able to chill this, it tastes a little bit better and doesn’t have much of a medicinal aftertaste.  Either cold or warm, though, this tastes light years better than most shots—kind of like liquid pina colada lifesavers.

As far as intensity is concerned, this isn’t one of the more potent ones I’ve had—but that’s okay.  This shot provides functional energy, and I’m hard-pressed to think of one I’ve liked having more before my morning workout than this one (Mr. Lavoie emphasized that this is the sort of thing to take before undertaking intense physical activity, a point I decided to put to the test).  I don’t think I go easy on myself when I exercise—I go 30 minutes on Jacob’s Ladder, and then spend about an hour on the weights.  With this shot, all of that seemed just that much easier—when I left the gym, I found that I wasn’t nearly as worn out as I usually was.  So if only for that, this would be my go-to shot for my daily trips to the gym.  But, there is more.

For having as little caffeine as I suspect this has, I sure felt great for quite a while—about five hours, to be exact.  And the thing is, once the effects of the energy blend wore off, not only was there no crash, but I felt light years better than I usually do after the caffeine wears off—not in the least worn or ragged, which leads me to believe that this is probably far easier on the system than most energy products.

I think the taste still leaves something to be desired, as I wouldn’t really go back to it for the flavor, but I freaking love the functionality of this shot—I love smoothness of the boost, I love how enabled I felt but not at the expense of my health/energy levels, and I love how dang long this lasted—and did I mention these are only 99 cents where there sold?  As far as function is concerned, you’d have to be insane not to go with one of these shots.  I strongly recommend you give them a try if you can find them nearby, as this is a rare sort of company that provides a great product and really deserves to thrive.