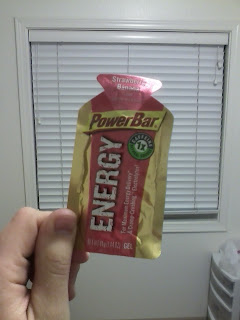 Not as common as most PowerBar products, but still not difficult to find by any means.

Aesthetically, this isn’t anything special, though functionally, I suppose I have to admit it’s nifty.  It’s compact, easy to open, down and discard as inclined.  What more is there to say?

I don’t know what else to say.  This stuff is really bad.  Upon first tasting it, you might not think so—sure, the pseudo-sweetness of the glucose and the saltiness of the salt are a bit strange together, but almost something that could be gotten used to.  Bad news, however, is that you don’t.  The combination just gets worse and worse until you’re gagging the salty sickly syrupy mess down.  The flavors don’t do any favors here, either; they just kind of emphasize whole aforementioned experience.

I’ve liked PowerBar’s stuff in the past, but flavorwise this is a flop.  I’d just as soon they caffeinate one of their bars and get my energy/electrolytes that way.

If this didn’t work to some extent, I’d just write it off altogether.  Bad as it tastes, though, it works alright.  No, I didn’t feel much of a buzz per se—but I did feel rejuvenated and refreshed.  Enough, yes, that I didn’t feel so scandalized by the flavor.

Felt refreshed for about an hour or so, after which I was quite ready for bed…if it weren’t for the continued need study for my stupid calculus test.

Yes, it tastes pretty bad, but no, I cannot in good conscience enjoin absolute abstinence from it.  It works well enough that it would be worth trying during a workout at least once, then deciding from there if it’s worth it or not.  As for myself…I’ll be keeping an eye open for the other flavors.  You’ll know pretty quick if I find one that tastes good.