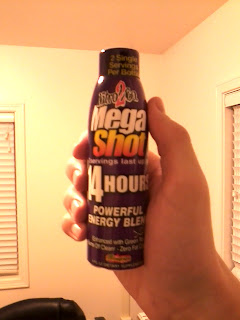 Not listed, but has to be on the high end of things.

Live near a Maverick gas station?  Pick up your Nitro 2 Go shot there.  I haven’t seen them anywhere else.

This one actually looks halfway decent, at least compared to the Sweet Berry.  The same weird homogeny of fonts is present here, but the ridiculous sunburst/rasta color scheme is gone, replaced by none other than the color purple—whom we can thank for today’s episode of Sesame Street and for the relatively decent appearance.

In a word—fake.  Doesn’t even tastes like pomegranate…more of a thin grape cough medicine than anything else.

Say what you want with regards to the taste—but let me tell you, this is not a low-key shot.  If you’re going to go and down the whole thing, get ready to buzz hardcore—and to do so for quite a while.  Read on.

I don’t now what kind of regimen one would need to follow to get the 14 hours of energy the bottle talks about—and given the price and the flavor, I’m not terribly interested in going back for experimentation.  But for downing the whole shot in one go, I got 10 hours of really serious energy that only tapered off at the end, culminating at a minor crash.

If you’re the sort that’s into shots and doesn’t really care that what you’re drinking tastes like sweetened dog bile (I know there are people out there that eat rocky mountain oysters and other sex organ-based foods to prove how manly they are; I assume these are the sorts of people that are into these gross-tasting shots) and need an insane degree of energy, then this is a great product.  As for myself—I’m partial to energy products that actually taste good, and Nitro 2 Go Mega Shot—Pomegranate is not on my “to revisit” list.