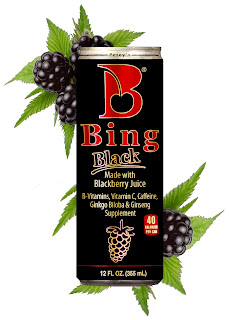 I had high hopes that I’d be seeing this one all over the place once it showed up at the local Broulim’s supermarket—after all, once a product reaches small-town Idaho, it’s usually everywhere else (ex: Monster Energy—Ultra Blue).  Turns out, however, that the store had just received them as samples to see whether they could sell them; apparently they did so poorly they had to stick them in the discount section for a buck a pop.  Seems that I was lucky to pick one up when I did—he who hath ears to hear, let him hear….

Biggest (and probably the only) problem I have with Bing energy drinks is that they don’t look the part, and because of that are pretty easy to overlook—which is irritating to me, having tried that, because I would like all the help seeing this I can get.  A drink this good needs to draw the skeptical consumer in, hypnotize them, open their mind and have them reaching and paying for it before they even give it a second thought.  You shouldn’t need me to point this out, Bing.  I really recommend you take the can back to the drawing board; maybe that would have helped them sell a bit more here in Rexburg….

I didn’t think I’d ever have the chance to use this again, but here goes—HOLY FLIPFARTS THIS IS A DELICIOUS FREAKING ENERGY DRINK!  It’s so good that it occurs to me that making a drink like this should be something intuitive, an idea that somebody should have capitalized on a long time ago rather than focusing their energy on churning out Red Bull clone after Red Bull clone after Red Bull clone.  In any event, good news is that Bing finally decided to develop and put it on the market, so that now you can get your caffeine and blackberry fix in one go—seriously, this tastes like somebody juiced blackberries and spiked it with some caffeine (except you really don’t taste it—no bitterness, no bad aftertaste).  You don’t even taste the artificial sweeteners—you can enjoy all 12 ounces with only 40 calories.

This really packs a punch for only having 120 mg of caffeine—seriously, I’ve had drinks approaching 200 mg (or so they say…freaking Rip It) that don’t perform this well.  This is dang good energy, with almost about as much alertness and functionality than one could realistically ask for (I did notice some jitters on top of all that, but it wasn’t enough to be distracting or get in the way of anything I was doing).  If it had only done better at the store, this would for sure become a staple of mine.

Three and a half very solid hours, no crash.

I don’t know that I did Bing Black justice in this review, but in all seriousness, that’s something that’s hard to do.  It tastes so dang good and works so dang well that I have a hard time nailing it all down.  Drink a can and see for yourself—I think after you’ll understand.