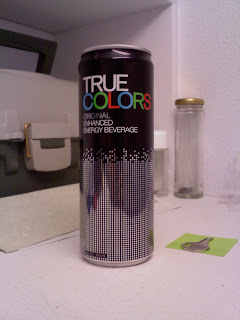 If you’re looking to get a hold of True Colors head to Big Lots—which apparently is where energy drinks go to die.  If you can’t find it there, you’re probably out of luck (so to speak).

I’m not sure anybody involved in True Color’s design actually cared about what they were doing.  They name the drink ‘True Colors’ (which doesn’t make a lot of sense as the name of an energy drink anyway), and…they don’t do a thing with the can.  Regular, repeating silver dots over the lower ¾ of the can give the illusion of a fizzing beverage, then above that is the name of the drink, with the word “COLORS” in drab shades of blue, green, and red that somehow remind me of a 1970's television set.  It’s nothing offensive, but still the laziest thing I’ve ever seen as far as presentation is concerned.  Oh, and one more thing—trying to read the ingredients and nutrition facts with those silver dots in the background is freaking obnoxious.  Just had to get that out in the open.

When I read the word “Original” on the can, I knew what I was getting into—Red Bull clone, or a stab at it…ah, the irony.  Sure enough, it was exactly that, but the taste is very substandard as far as Red Bull clones are concerned.  It’s got the beginnings of the Red Bull flavor, but it’s exceptionally sour towards the end and possesses a significantly bitterer (yeah, according to Microsoft Word, that’s more correct than “more bitter”) aftertaste than Red Bull.  I’m not sure that True Colors will find a specific niche among energy (I guess it would be more correct to say, “would find a specific niche”, since the drink was discontinued) except perhaps the odd consumer that is looking for a cheap boost and doesn’t really care about what they get.

True Colors has kick enough to take the edge off of one’s fatigue, but should not be counted on for anything more substantial than that.

I got about two hours of efficacy after drinking True Colors, after which I crashed and was done for the day.  If that’s all you need, then I suppose you could go with True Colors.

All in all, this drink is pretty second-rate.  The flavor is tolerable but not at all pleasant, and the kick is by-and-large unremarkable.  My final verdict: just pass it over.  You want an inexpensive Red Bull clone?  Try Slap Frost Low Calorie, which 1) tastes better, 2) kicks like the dickens, and 3) has only 30 calories per can.

WEBSITE: Was drinktruecolors.com, but the domain’s up for grabs with the discontinuation of the drink.