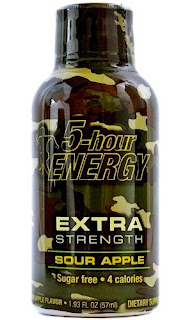 I get conflicting reports on the caffeine contents of these shots—I’ve been told that these Extra Strength shots contain anywhere from 200-250 mg of caffeine, with the most credible source (Consumer Reports) listing the content at 242 mg.  Maybe I should check with the company proper to find out if they’re into officially disclosing that sort of thing—If even Monster’s doing it now, 5 Hour Energy should only be able to hold out for so much longer….

I may seem scattered for now, but I guarantee you that there is probably somewhere in your town selling it now, whether it’s Wal-Mart or a local grocery store or a gas station.  Even if it isn’t, just give it a few days.

One of my favorite things about 5 Hour Energy (funnily enough) is the look.  Even if I’m not wild about shrink wrap, I’m big into cardio, and I’m big into sunsets—so a runner sprinting up a mountain at sunset can’t be anything short of awesome in my book.  Unfortunately, this new shot doesn’t have any of those things but the outline of the runner—with an inexplicable camouflage background.  I would get it if this were anything about the flavor that was directed towards hunters (deer musk flavor?) or if a portion of the proceeds went towards PTSD treatment for veterans of the U.S. Military (please note the worthiness of that suggestion, 5 Hour Energy folks), but as is, the whole thing looks kind of thrown together without apparent thought—albeit neatly.

In times past, I’ve made clear in no uncertain terms my distaste for 5 Hour Energy and its multitudes of clones, having generally found them to be foul-tasting and badly overpriced.  Well, I might still begrudge them the $3.49 I spent on this (it was NOT purchased at Wal-Mart), but I cannot deny that as far as flavor is concerned, this is a most successful offering and a definite improvement over the shots they’ve released in the past, especially of the Extra Strength line.  First things you notice once you open the shot are 1) the distinct, unadulterated smell of sour apple, and 2) the same general appearance as their berry shots—call me crazy, but I don’t think that apple shots or apple products in general should be faint pink in color.  The first swig is pretty intense, a blast of sour apple flavor and energy ingredients and artificial sweeteners.  Small swig after small swig, however, things start to even out—the apple really starts to come out, crisp, convincing, and thoroughly pleasant.  If it lasted a bit longer I would feel perfectly comfortable awarding it a solid 9/10; only problem is that a second or so after you swallow you are hit with a real sledgehammer of an aftertaste, so overwhelmingly sweet that one is almost tempted to attribute it to stevia—except there is none.  Anyway, it’s disagreeable enough that I’m docking two points for it, but notwithstanding, I can guarantee you I’ll be coming back to this shot again—even though it makes me feel really unprincipled to do so (I’m supposed to hate this brand, remember?).

It’s interesting what improving the flavor has done for the perception of these shots—in times past I would admit that they perform well, but my praise was lackluster and grudging because of what I had to go through to get the caffeine into my system.  Having completely enjoyed the flavor, however, I feel much less restrained in my praise—this stuff is glorious.  No more than five minutes after the fact I was buzzing like a boss, performing necessary household labors, completing hour-long runs, and going about my day-to-day routine in an exponentially enhanced but non-jittery fashion.  I may be forced to admit—it’s not just because they were the first that 5 Hour Energy is considered the best.

Amazing, also, what not being a hardened caffeine junkie has done to my caffeine sensitivity—I think five hours is a more of a safe guess for consumers partaking of the “moderate” quantity of 400 mg a day.  Now blissfully enjoying being non-addicted and caffeine sensitive, I got about six hours out of this.  Lovely when a shot outperforms all expecations!

I’m impressed—and coming from a fairly consistent energy shot hater (better yet, a loather—is that even a word?), that really is saying something.  Regardless of what energy seeker niche you fill—shot hater like me, casual consumer, seasoned energy connoisseur—this is absolutely worth a try.  Swallow your pride, fork out the cash, and enjoy the flavor and that wondrous caffeine rush—and please, do leave your thoughts.  I really am interested in seeing the public consensus on this one.