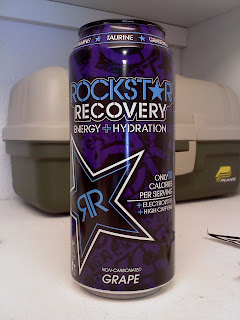 About as easy to come by as any other major energy drink; it’s not finding it that is next to impossible as opposed to finding it.

Can’s got the same format as most of the Rockstar line, except with a nifty purple and pale blue color scheme.  The result is quite the eye-catcher. 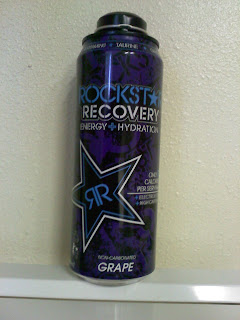 I wasn’t terribly impressed by the taste.  The grape flavor was unmistakable, but in the end the drink was still quite watery, artificial sweetener-esque and unsatisfying—in this instance, I really don’t think it would kill anyone to add a bit of sugar to the stuff.

The kick actually caught me a little off guard—I had just barely finished the can and was waiting at a gas station on the way home from Twin Falls when I noticed I was bouncing—the jitters were already starting to kick in, and the drink was well on its way to proving itself to be one of Rockstar's more effective beverages.

Quite impressive; certainly worthy of being considered above and beyond the call.  I was making a trip home a good deal later than normal, and I knew I was going to need something that would last to keep me going.  Just in case, I had a backup drink, but never had to use it.  I made the trip home just fine, and had energy to spare.  The effect was interesting—it was as though there were a multitude of threads anchoring me to consciousness, and the caffeine was insulating and strengthening those threads.  They were slow to fade away, and even when I was hanging by that last thread, I still could not fall asleep before my time.  If you’re looking for something solid and dependable in the longevity respect, this is definitely the drink for you.

I really wish that some more effort had been put into the flavor, because the kick this drink offers is really spectacular—it’s just not the nicest thing to drink down.  This seems like a small reservation to have next to such an awesome kick, so I’m going to say forget (as much as you can) the taste and consider this drink first and foremost the next time you need a solid, long-lasting boost.

Given my experience with the 16 oz. Recovery—Grape, I thought I had a pretty good idea what to expect—and I got it.  The 16 oz. can is intense, and the 24 oz. can is even more so.  Just expect more of everything I talked about in my review for the 16 oz. can—more jitters, more bouncing, etc.

The 24 oz. can hit harder than the 16 oz. can, and you can also expect it to hit for longer—plan on 5 hours or so of energy before the lack of sleep from the night before catches up to you.

Liked the 16 oz. Rockstar Recovery—Grape?  Chances are you’ll like the 24 oz. can.  As for myself, I have to say I had a harder time drinking the 24 oz. can than I did the 16 oz. can, probably just because there was more of it to burn through—by the time I hit the 18 oz. mark or so, it was getting old for me quick.  But like I said, if you are partial to the stuff, ignore what I have to say about the taste and enjoy your Rockstar Recovery—Grape!