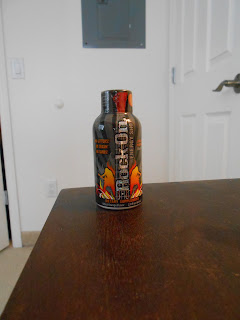 If you’re really dying to find this (no reason to be), go to a Walgreens.  Otherwise you’re better off just going to Wal-Mart and buying an Eternal Energy shot (assuming you’re into shots…I’m not).

Probably the most irritating thing about these shots is that on the shelves, they look appealing.  I mean, they’re obviously 5 Hour clones, but they’re 5 Hour clones with bling—enough effort went into the design that it gives you the (false) hope that they were similarly attentive in the flavor and function departments.

Even on ice, this doesn’t taste very good at all.  Think orange cough medicine and you’ve got the gist of it.

On top of really not tasting good, this one is pretty weak, venturing south of what I consider to be legitimately useful territory.  The only time I could see it being helpful is if you’ve had your full night’s sleep, but are still having a little trouble getting started.  I don’t see it putting a dent in anything more serious than that.

About an hour and a half to two hours without a crash—though that’s not saying much, because it really didn’t have much of a boost, either.

Even by shot standards, this is pretty bad.  It’s overpriced, underpowered, poorly flavored, and is in all other respects fairly inferior stuff.  Avoid.