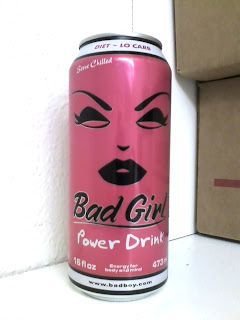 I seem to remember that it’s 166 mg, but I’d have to check the can to make sure.  I have the feeling, however, that it’s not an especially pressing matter to get this information online.

There are times that I wonder whether boxes of this stuff get lost in the inventory at gas stations, only to be found years later and placed on sale.  The spontaneous appearance of Bad Girl at a gas station that I knew had carried it long ago, coupled with the substantial amount of dust on the top of the can, leads me to believe that such is the case.  Other than this fluke appearance, Bad Girl is long gone.  I have no hopes for finding it in the future, and I doubt that anyone else will fare better.

As indicated, this is another berry-flavored drink, as are most geared towards females.  I still don’t really get that, but I can at the very least say it’s more full-flavored and easier to enjoy than Go Girl’s bland attempt.  Only thing I have against it is that its’ got a very heavy artificial sweetener aftertaste—so if those bother you, you might want to stay away.

Bad Girl got me going alright; I imagine it would have worked just fine for its target demographic.  As for myself (white male, 6’1”, 170 lbs.), I found it perked me up and got me almost jittery.

Somewhere over three hours, without any perceptible crash.

To conclude, Bad Girl was an alright energy drink.  Given its years-long extinction, however, I doubt that anybody reading this review will be reading it in an attempt to make a decision regarding buying it.  If looking for an alternative, I’d suggest Rockstar Pink.