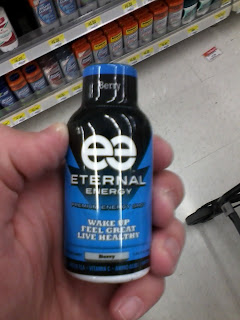 Came across this one on display at Wal-Mart where a little of everything—lotion, feminine hygiene washes, energy shots, NSAIDs, you name it, it was there—was on display, the only thing being common among them was the 88 cent price tag.  You know you’re having an odd day when you find yourself rummaging through such displays to see what else you can turn up (in the end, this and two other energy shots).

There’s really nothing to talk about here—just your run-of-the-mill shot bottle with a blue shrink-wrap wrapper covering it (now that I think about it, the pseudo-infinity symbol formed from the ee logo is kind of clever).  I came across it purely by accident; unless you know where to look you’ll probably do the same.

For the record—I don’t particularly like energy shots.  While some of them make for a pretty good energy experience, almost all of them taste terrible—at least that’s one reviewer’s humble opinion.  So, as I’m ripping this product apart for it’s taste (and to a certain extent the kick), take it with a grain of salt, and I do promise I’ll get to this product’s merits at the end of the review.

This is a 5 Hour Energy clone.  It doesn’t taste particularly good, but to be perfectly fair, it does taste a bit better than its inspiration.  There is more of a berry flavor present (unconvincing though it may be), and rather than having a generalized medicinal bitterness throughout, you only get a somewhat strong bitterness towards the end of it.

Is it vastly inferior to a number of berry energy products I’ve had before?  Yes.  I will (spoiler alert) still be sticking with Rockstar Zero Carb for its glorious flavor and exceptional kick.  But…is this better than the original 5 Hour Energy?  Yes.

In addition to being somewhat more palpable, Eternal Energy—Berry is somewhat stronger.  I did not like that made me uncomfortably jittery—it reminded me of Monster Energy—M3 in the sense that I really did not like sitting still, and had to be up and moving to alleviate that sensation.  If you’ve got a job that requires lots of moving around, then this will work alright.  If, however, you have a desk job or a meeting or will be driving, pass this one over.

In addition to besting it in flavor, this one will last you longer than 5 Hour Energy.  I got somewhere between six and six and half hours of energy out of it, after which there was a very gradual tapering of the effects.  No crash was observed, which was a pleasant surprise indeed after the jittery, ragged kick.

Did I particularly like Eternal Energy—Berry?  No.  Is it entirely without merit?  No.  At the very least, it has cemented my cognition that 5 Hour Energy has no reason for existing.  This is a shot that is everything that 5 Hour Energy is, and then some—and it does all this for only 88 cents, vs. 5 Hour Energy’s $2.75.  If you’re going to do the fake berry energy shot thing, you might as well do it in a way that’s easy on your wallet.  Stick it right back to 5 Hour Energy and get yourself an Eternal Energy shot.