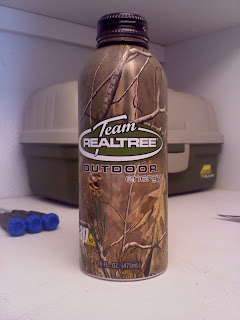 Couldn't find it for the life of me.

Only place I’ve ever seen this stuff is at the Sportsman’s Warehouse in Idaho Falls.  I don’t know that it’s carried at other S. W. locations or at other outdoorsman’s chains, but at least around here this stuff is pretty scarce.

I peered inside the bottle before I tried the stuff, and was a little startled at the color—an alarming fluorescent green, with the slightest tinge of yellow.  The first sip made me think of Mountain Dew, but the rest of the drink was unmistakably ginger ale-esque—about time somebody tried to appeal to that demographic (I am exceptionally pleased that it’s not a Red Bull rip-off, which seems to be the case quite often when I think I’ve found something new and unique).  Being a ginger ale fan, I was naturally quite pleased with the stuff, though I’m taking a point off for the mild but persistent aftertaste that’s still lingering a few minutes after the fact.

This is a very slow and mildly acting energy drink, but there’s no questioning its effectiveness.  It’s the kind of drink that doesn’t really shock you into a high-energy state; it just clears out all of the cobwebs and makes you decidedly awake and alert, without jitters or crash at the end.  I guess if I had to sum up the experience in one word, it would be "natural."  I can see how it would be made for the hunting type, who need to lie still and quiet but awake while waiting for their target game to come along and would not benefit from a higher octane beverage.

After the wake-you-up, the effects are not especially tangible, so subtle that you wonder if it just woke you up and dissipated.  It really does feel like you’re awake under your own steam, which makes it hard to tell how long it really lasts.  I was quite awake for a good while after the fact; I’m going to give credit to the drink for that.

Even if not for intensity, this is the kind of drink that leaves an impression on you—in addition to tasting very different from just about every other energy drink in existence, it’s action is one of the most subtle I’ve ever had, but paradoxically does not compromise effectiveness in the least.  This is one of those drinks you really do have to try, offering a positive experience like none other I’ve had in my career of energy drinking.