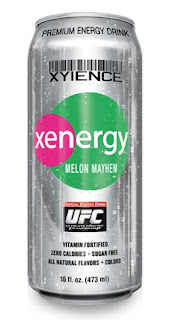 Scarce, at least for now.  Xenergy drinks seem to be popping up around here more and more these days, so I for one think that this will get easier to find sooner rather than later—and I’m looking forward to it.

Aside from some nicely colored spheres, the bare can’s pretty bland.  I don’t know the difference between Xenergy Xtreme and Xenergy Premium energy drinks, but whatever it is, I don’t think it would kill to clad them all in black, rather than just the former of the two.

Here is where things get really, really interesting.  I’ve never had a melon energy drink before, so I don’t know what to expect—liquid watermelon Jolly Ranchers, maybe?  When I first popped the can open I knew this wouldn’t be the case; it smells quite strongly of cantaloupe and honeydew, with the latter being the stronger of the two.  Taking a sip of the pale pink/orange liquid (most appetizing color I’ve ever seen, as a side note), I found it to be an exceptionally smooth, well balanced, and convincing combination of the two flavors whose aromas I detected when I first opened the can.  It now suffices me to finish only by saying that it is a seriously delicious and wonderfully unique energy drink, one that I could drink again and again and again if only I could find it on a regular basis—if you can find it, the taste alone is worth it.

At 184 mg of caffeine, this isn’t the most formidable beverage in the world—but it does a good job.  It’s enough to get you really awake and slightly jittery, which means sitting still might be a chore, but if you’ve got lots to do, you will certainly feel the inclination to get it done.

Three and a half hours, sans crash.

Xenergy has done it again—Melon Mayhem is a fantastic energy drink, and one worth the consideration of energy drink rookies and aficionados alike.  If I had one item of constrictive criticism it would be that the kick isn’t as stout as it could be, but it still gets the job done and I have to give it props for that.