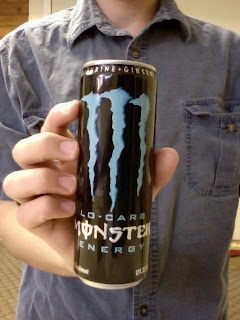 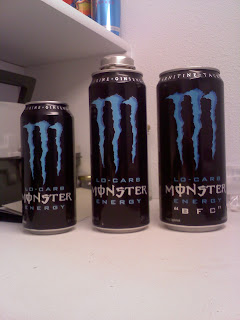 This low carbohydrate version of the original Monster Energy is found everywhere that its high calorie counterpart is, which is to say that it falls in the category of “least difficult” to acquire.

While most low-calorie/diet/etc. drinks often come packaged in a can that appears to be intended a warning against the taste more than anything else, Monster packages Lo-Carb in a can that has always caught my eye and intrigued me, even in the days where I studiously avoided any such variant of an existing sugared beverage.  It is not a whit less effective than the original, and almost seems to declare that the fact that it’s low on calories will have no effect on the flavor.  Same tiff I had with the original applies here in that it seems stupid to make the 24 oz. can resealable and not do the same to the 32 oz. BFC.

The reason I avoided beverages such as Monster Energy—Lo-Carb in the past was out of fear for the taste—in my experience, many diet drinks were desperately lacking in the flavor department, and the artificial sweeteners contained therein served only to mar the experience by their strong and often unpleasant aftertastes.  Well, drinks like Xenergy Cran Razz Premium and Monster Nitrous—Black Ice opened my mind to the possibility that not all such beverages had to suck, and finally I decided to start reviewing low calorie drinks starting with Monster Energy—Lo-Carb.  Popping the tab on the can, I was greeted with a smell identical to the original—so far so good, but will it hold up to my expectations in terms of flavor?  I am pleased to say that it did—it is Monster to the core, and an excellent alternative to the original for those who want to limit their intake of empty calories as much as they can.  Something to remember is that the sucralose taste is extremely prominent the first time you drink this, but diminishes exponentially each subsequent time.  By the time I got to the BFC, I could barely tell the difference—except I liked this one more.  Just smoother overall.

I actually got a pretty decent jolt out of this new can—only a hair less than the larger, vastly more common (for now) 16 oz. can.  It’ll wake you up in a heartbeat and actually get you reasonably jittery, which is more than what some drinks with the same caffeine content can claim.

The slim can didn’t do bad in this regard, either—seems I was just shy of three and a half hours before the effects actually wore off.

In my review of the original 12 oz. Monster Energy, I stated that it wasn’t bad, considering I only spent a dollar on it, and stated that there was no real harm in trying it if one were to be interested.  Having now had the 12 oz. Monster Energy—Lo-Carb, I can say that 1) it’s a much better value in terms of energy, and 2) it tastes better.  If you’ve got a buck to spend, go with the 12 oz. Lo-Carb.

The 16 oz. Monster Energy—Lo-Carb performed very well in terms of intensity of kick, even outdoing the original by some degree (not sure how that works; but it is consistently the case with almost every low-carb drink I’ve had).  Anticipate a healthy degree of jitters with an absence of residual fatigue.

I found my time energized by Lo-Carb to be quite pleasant overall—it didn’t just slap me across the face and leave floundering, but provided me with a much needed lift that was very slow to wear off.  The end of the experience was uneventful, with no crash to hold against it.

While it may not be to the liking of those who are extremely finicky about their Monster beverages tasting exactly like the original, I found the 16 oz. Monster Energy—Lo-Carb to be an exceptionally agreeable and effective energy drink experience experience.  If you love the flavor but don’t want to feel guilty about drinking it, I offer my recommendation of Monster Energy—Lo-Carb as a delicious and effective alternative.

The 24 oz. can is a bit slow getting started, but when it hits, it hits suddenly and it hits hard.  I found the original to be effective, but a bit lackluster—not so with Lo-Carb.  It had me seriously wired, enough that it cost me a good deal of effort to keep from jabbering my head off to the cashier at the gas station.

No half-hearted job out of Lo-Carb—I got about four hours of solid, unadulterated energy or so before I was ready to hit the sack for the night.

The more I drink Lo-Carb, the more I like it.  The 24 oz. can rocked—great taste, great energy.  This drink in this size will suffice in any realistic energy-requiring situation, but…there’s still the BFC to review.

I’ll be honest—I didn’t enjoy the original Monster BFC.  I got wired, sure, but I felt sluggish from all the sugar I got, and “sluggish” isn’t an adjective I like to use when I talk about how I feel after I’ve drank 320 mg of caffeine.  Then comes my time to review the Lo-Carb BFC, and WOAH…this is what 320 mg of is supposed to feel like.  This thing had me seriously freaking jacked up.  No sluggishness.  No pancreas singing “Sadly Sings Destiny” by Blind Guardian.  Just energy.  Lots and lots of energy….

With a lot of beverages, I get wired for a half hour, 45 minutes, and from there it just diminishes; whether it does so slowly or quickly varies.  This was not the case with the Lo-Carb BFC—I was consistently wired for about four and a half hours before any sort of diminishing occurs, and even then it’s kind of a slow process—I was still pretty awake for an hour and a half or so after the tapering off started.

I honestly think that the 24 oz. will suffice, but there is really nothing to lose (except sleep) going for the BFC.  In addition to being effective, all 32 ounces go down smooth and will not nuke every organ involved in sugar metabolism.  If asked, I would suggest bypassing the original Monster Energy BFC and get the Lo-Carb version.