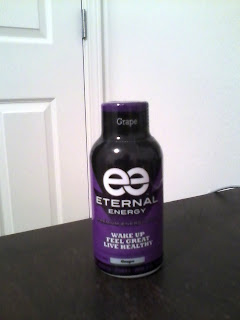 I know that Wal-Mart recently started carrying these shots; though their location from store-to-store varies.  At the local Wal-Mart, they are on display with a plethora of misc. items on sale for 88 cents, including hemorrhoid cream.

As far as the general motif is concerned, Eternal Energy—Grape isn’t all that impressive…but it is purple, which counts for something in my book.

In terms of flavor, this is a step down from 5 Hour Energy—Grape, being significantly more bitter and medicinal.  That said, it’s not so much worse that I would (assuming I liked energy shots all that much) pay almost two dollars more to get the 5 Hour Energy version—especially given the fact that I think that this shot performs better.

This is noticeably more intense than the original strength 5 Hour Energy shot—if you want more alertness than 5 Hour Energy will give you and some jitters thrown in the mix, Eternal Energy—Grape is the way to go.

Same as the berry—somewhere over five hours, with no crash.

So while Eternal Energy—Grape is far from an exemplary energy product, it’s still light years better than 5 Hour Energy—Grape.  They’re both pretty unpleasant as far as taste is concerned, but Eternal Energy gives you even more energy, and does it for about 1/3 of the 5 Hour price.  Unless, then, you are an especially rich 5 Hour loyalist, there’s no reason you shouldn’t reach for Eternal Energy and save yourself the money.