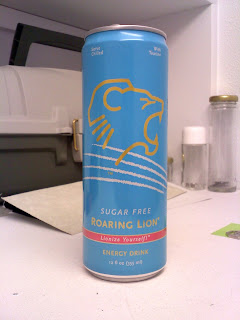 Roaring Lion energy drinks were kind of a turning point for me as a reviewer—for the first time, a company was willing to grant my request for samples, and graciously sent me a can of both Roaring Lion and Roaring Lion Sugar Free—along with a can of Red Bull and Red Bull Sugar Free so I could compare the two.

I wrote positive (relatively, when it comes to Roaring Lion Sugar Free) reviews and moved on.  Well, recently, I came across a 16 oz. can of Roaring Lion Sugar Free passing through La Grande, Oregon and decided to give it a whirl.  My experience was completely different this time around, which shouldn’t come as a surprise, I suppose—after all, the first time I drank Monster Energy—Lo-Carb and Rockstar Sugar Free, they tasted like canned sucralose with a hint of their respective flavors; but with each successive attempt the taste vanished exponentially until it was no more. 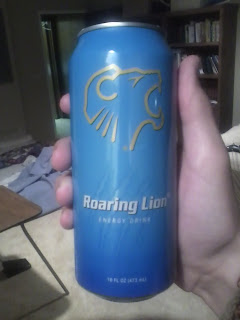 So this time, I really have something to report on—the gist of it is that Roaring Lion Sugar Free is the Red Bull clone—you won’t find a better one anywhere.  Read on.

Individual specimens of Roaring Lion Sugar Free are hard to come by—I’d just order a case on the Internet.  Yes, I feel safe recommending that course of action if you’re a sincere Red Bull substitute seeker.

I quite like the packaging of Roaring Lion Sugar Free, mostly because of the color scheme, which manages by its lustrous sky blue mingled with red, yellow and white accents to conjure within my mind thoughts sunny days in southern California, swimming in a nice pool on a warm day, and, of course, a drink that is light on calories without compromising the flavor of the beverage.  My only tiff with the original look might be the lion front and center—which, in contrast with the lion on the new can, looks like it’s in pain (I described it as appearing “as though it sat on a cactus” in my review of the original).  This is remedied on the newer cans, in which the lion actually looks as though it is roaring.

I gave a 10 out of 10 to Monster Energy—Import for being the drink that Monster should have been, so I think Roaring Lion Sugar Free deserves the same for being the drink that Red Bull should have been.  As I indicated, the first time I drank this, I found the artificial sweeteners to be quite distracting—but the second time around, there were none to be detected.  Instead, I was tasting Red Bull—but awesome.  Whereas the flavor of Red Bull is quite muted, Roaring Lion Sugar Free is bold and full-bodied—but with an identical flavor profile that, were it not for the fullness of the flavor, could probably deceive even the most discriminating of Red Bull fanatics.  Also absent is the bitter medicinal aftertaste characteristic of Red Bull, which it is almost as famous for as it is for being the first energy drink.  It is crisp, it is clean, and it is dang good—if you’re into the traditional energy drink flavor, as I am, this is an absolute must.

The 12 oz. can doesn’t deliver a bad kick at all—it’ll provide an adequate alertness in most day-to-day, not-so-extreme situations; and if any find a single can lacking in desired potency, a second would probably do the trick.

The word “adequate” fits perfectly.  It lasted an appreciable three hours and was rather consistent in the level of awakedness it delivered, and finished without a crash.

With regards to the 12 oz. can, you can’t really go wrong, because of the flavor—but I’d still stick with the 16 oz. can; it’s got a broader scope of utility.  Read on.

The 16 oz. can has 38 more milligrams of caffeine than the 12 ouncer, and it’s enough to make an appreciable difference.  I would actually use the word “wired” to describe the sensation—I was actually reasonably jittery in addition to being substantially alert.

So in the end, what I have to say is this—most Red Bull clones come across as pathetic.  They are poor imitations of the original, and their attempt at getting a piece of the Red Bull target market are sucker punches at best.  Roaring Lion Sugar Free, however, has blown Red Bull completely out of the water—there is no longer any reason for Red Bull or Red Bull Sugar Free or Red Bull Total Zero to exist.  Roaring Lion Sugar Free is everything that these drinks should have been, and then some.  It’s bigger, better, stronger, and, to top it off, light years cheaper—I don’t think I paid more than $1.49 for the 16 oz. can.  Contrast that with a can of Red Bull of the same size, which runs about $3.69, depending on where you go.  If you like the traditional energy drink flavor, make Roaring Lion Sugar Free your drink.