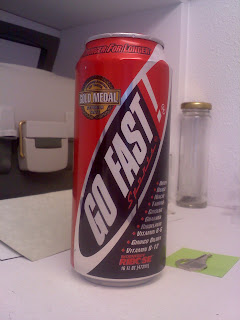 While easier to come by than most other products the company produces, you still may have to look around a bit to find it.  Just be patient, and you’re bound to come across it eventually.

The appearance is relatively standard—lots of red with diagonal logo front and center—but still different enough to ensure that it won’t be overlooked.  A nice touch is the gold emblem certifying its approval by the American Masters of Taste.  However subjective a factor taste may be, the seal itself is quite enough to pique one’s curiosity (now the question is…to get the seal, does one need to actually taste good, or do they just buy the American Masters of Taste out?), as evidenced by my purchase.

With the seal on the can in mind, I took a swig, and…I don’t know what to think.  It’s unique to be sure, but it is one of the strangest drinks I’ve ever tasted.  There is a taste and sweetness that reminds me of honey (no surprise there; it’s the first ingredient listed on the front of the can), a tartness that reminds me of lemon, and a cooling effect in my mouth and throat after the fact that reminds me of mint…so, maybe carbonated honey, lemon, and mint tea?  I’m going to just say grab a can and try it, decide for yourself what it is and how you feel about it.  I’m still at the point where I’m not sure about either.

Leaving the thoroughly strange taste behind, Go Fast delivered a heck of a pick-me-up.  There were some very mild jitters, but mostly I just felt very clear of head and very lucid.  If only for that effect alone, it’s an experience worth buying the can for.

We’ve established that Go Fast will make you do just that, and once you’re going, you will be for hours.  The post-energetic period was uneventful, with no crash worth remembering.

I very much liked the kick Go Fast provided, it’s just the taste that I’ve taken off points for, and that only because I really have no idea what to make of it.  I’m going to give my recommendation if any out there would like to give it a shot; as for myself, I’m going to get a few more reviews taken care of and maybe give Go Fast another shot after that.  I’d really like to see how I feel about the taste a second time around.