Review for The Hangover Recovery Shot 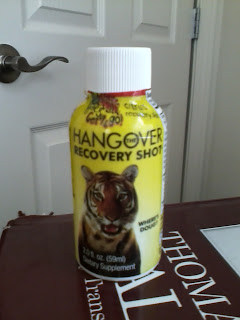 The problem with reviewing a specialty shot like this is the fact that I don’t drink, and because I don’t drink I’ve never had a hangover nor plan on having one, and because of that I’ll never be able to review this shot based on that feature.  I do, however, have a teething 9-month old that hasn’t been letting me sleep the past couple of nights—and when I wake up, I definitely feel that I could use a recovery of sorts.  So this recovery shot is getting reviewed as an energy shot.  In this regard it performs great; if you’re really needing to know if it’s going to do it for your hangover I’d recommend Big Red Boot’s review here.

Not all that bad, really—mostly I like it because it stands out from the rest of the surrounding energy shots because it’s so bright.  I don’t particularly get the tiger or the quote (I’m assuming they’re supposed to be humorous) but then again I never saw the movie, so that shouldn’t come as a surprise.

This is the shot’s blessing and the shot’s curse, in my opinion.  On one hand, it tastes vastly better than any of the 5 Hour Energy shots or any of the other similar-tasting shots I’ve had—it has no bitterness, no aftertaste, and no artificial sweetener flavors; it’s one of the most…pure-tasting things I’ve ever had in the sense that the flavor is completely unadulterated by interfering influences.  But on the other, it’s fruit-punch flavored—now, it’s about the best-executed fruit punch flavor I’ve ever had, but on the other hand, it’s still something I’m not fond of.  Bottom line is if you love fruit punch and love shots, then this one will have you drooling…albeit energetically.

This shot has a pretty serious dose of caffeine for a shot, so it shouldn’t come as a surprise that it’s pretty potent—I went from being unresponsive in my Lazy Boy to buzzing no more than five minutes after I had this shot.  Interesting to note that for about a half hour after drinking it, I still felt the fatigue—it just wasn’t bothering me—but that went away eventually also.

This lasted about four hours before I crashed (would have loved it had the effects been a little more prolonged, but I suppose I can’t complain…), and it was enough of a crash to put me off.  Not an ideal feature, especially since this is definitely a morning shot.

All in all, this is a decent shot.  Again, because of the crash it’s not something I’d recommend in the mornings, but for a boost to keep you going from early afternoon to the end of the day, it’ll do just fine.