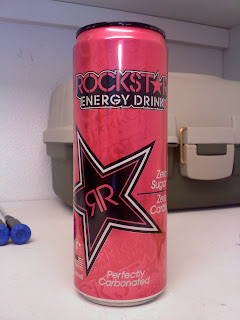 This one was not easy to come by when it first came out, but now it’s just about everywhere.  Just look for the pink can.

I’m not one for pink, but I think the packaging on this one is actually kind of clever.  The can is, as the name indicates, very pink, with black logo, ingredients, and top of the can adding a nice contrast.  This works well for the most part, and the straw is an especially nice touch (I even left mine on there for display).  For the fresa in all of us….

Reading the can, I wasn't sure what to expect.  There are some seriously odd ingredients in this drink—purple sweet potato juice extract, black carrot juice concentrate, red cabbage juice concentrate…makes for an interesting read.  The flavor’s not that bad; I actually liked it—kind of berry-ish.  I do knock points off for being kind of watery and having the artificial sweetener aftertaste, but it was otherwise not that unpleasant.

Rockstar Pink contains less caffeine and fewer energy-promoting ingredients than others the company puts out, so it should not come as a surprise that the kick was not stellar.  It was there, I felt it, but that’s all there was to it.

I observed an effect in Rockstar Pink similar to one that I observed in Amp Energy—Overdrive, though perhaps a bit more muted.  The initial, more intense part of the kick wore off as quickly as it came; there wasn’t a whole lot to it.  And yet, a couple hours later, I was lying in bed, tired and trying to get to sleep, but my mind wouldn’t stop working.  I was exhausted, but couldn’t sleep.  Not the most pleasant kind of awake, but if that’s what you need, I suppose you could count Rockstar Pink as a viable option.

Rockstar Pink doesn’t pack much of a punch, but it at least gets the job done to some degree, which is more than some drinks can say.  If you’re an individual such as myself, who betimes needs a serious kick to get you or keep you going, then Rockstar Pink wouldn’t be my first recommendation, though I imagine it will work wonders for those of the drink’s target demographic.