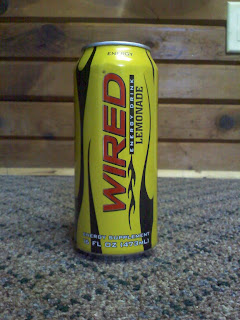 Aside from the occasional appearance at outlet stores, the only place I’ve seen Wired X Lemonade is at WinCo—so it’s not terribly hard to come by, as long as you have one of those nearby.

…Yeah, I’m not a fan of the packaging on this one.  Yellow background, black flames, red logo.  I don’t typically mind yellow with black (see Rockstar Recovery—Lemonade for an example in which the combination is successfully employed), but the shades used here are almost faded-looking and reminded me of the trashy lockers I saw at East Hartford High School when I was younger—and the last thing you want to be thinking about as you drink an energy drink are the lockers at a ghetto high school.

Wired X Lemonade has managed to approximate the flavor of lemonade, but that’s about it.  Tastes the part at times, but all in all is unconvincing and chemical-y.  Oh, how I longed for a Monster Rehab—Lemonade after the fact….

Given the relatively low caffeine content, the bare-bones energy blend, and my previous experiences with similar Wired beverages, I wasn’t expecting all that much out of X Lemonade.  An average, jitter-free boost was all I got.

Wired X Lemonade adds absolutely nothing to the energy drink world.  It’s just a fake-tasting, half-hearted stab at roping in more consumers.  If you love lemonade and you love it with caffeine, here’s my advice: there is a drink called Monster Rehab—Lemonade.  It is marvelous.  If you want me to elaborate, read the review here, then go out and buy yourself a can of it.  Pass over Wired X Lemonade.