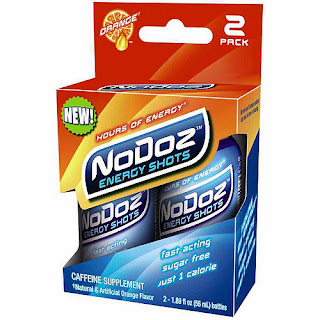 If you really need me to tell you where to find these, here—go to Wal-Mart.  Odds are, however, you already know that from your own excursions or from ads on the Internet—Novartis is being aggressive enough about getting the word out that most people are bound to by now.

Can’t say I like the orange on blue quite as much as the purple on blue the berry sported, but it’s equally tidy and still has that NoDoz logo going for it—which, when it comes right down to it, is about the only thing that matters here when it comes to these shots getting their spot in the market.

Like the berry flavor, this one’s agreeable by shot standards—but all that means is that I didn’t feel like I had to gag it down, so that’s faint praise indeed.  It’s pretty short on aftertastes, isn’t too harsh, and as is it’s good enough that if I were a shot guy I would prefer it to the flavor other orange-flavored shots.  I do, however, have other orange-flavored energy beverages with which I’m positively enamored, and next to them this one doesn’t stand a chance.

If you’re like me, having been spoiled by the likes of Spike, Bang, Endorush (review coming soon), etc., this is going to seem pretty lackluster, almost stripped-down.  If, however, you’re generally sparing and prudent with your energy consumption, the mid-level alertness sans jitters is going to make for a smooth and pleasant ride.

Somewhere around two and a half hours, two hours and 45 minutes.  No crash.

If my recommendation’s worth anything, I think you should try this at least once and get a feel what the bare-bones energy formula does for you.  If you’re a longtime NoDoz fan—chances are you aren’t going to be let down.  Enjoy your shot.  Either way, leave your thoughts in the comments below.