Review for No Fear 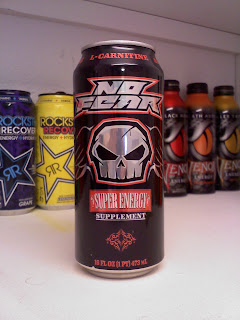 EASE IN ACQUISITION—8
It may not be as common as most of the major players in the energy drink field, but No Fear can be found at just about every gas station and convenience store that you can imagine.  I am not sure that this will always be the case; I have seen been seeing this drink less and less lately.
APPEARANCE/PRESENTATION—8
The packaging of the drink is pretty standard as far as format—black background, hardcore winged skull, name of drink in prominent, hardcore font.  It's exceptionally formulaic to be sure, but holds up to my scrutiny well enough.  I really can't complain.
TASTE—5
No Fear has an overwhelmingly sweet-fruity flavor, which is still more restrained than Sobe—Adrenaline Rush, but not by much.  It wasn’t initially unpleasant, but such was the overall experience that it got really old really fast.
KICK (INTENSITY)—5
No Fear packs a fairly weak kick—it’s there, but doesn’t do much at all, hardly bothering to offer anything beyond just perceptible.
KICK (DURATION)—5
So, as though it wasn’t enough that the drink pulled a “dead fish” bit on me, the stuff crapped out on me fairly early on—perhaps an hour, hour and a half or so after drinking it, any and all effectiveness was gone.  Not impressed, No Fear company, not at all impressed….
THE DRINK OVERALL—5
Given the chance, I’d say pass up No Fear and go with something that, oh, I don’t know…actually works, maybe?  Even if you are a fan of the taste, how much is that going to matter when the drink administers such a lackluster kick?  Short answer is "not much at all."  There are better, stronger energy drinks out there, as easy or easier to find than this one—no reason for you to have to settle.