Review for The Tastiest Buzz 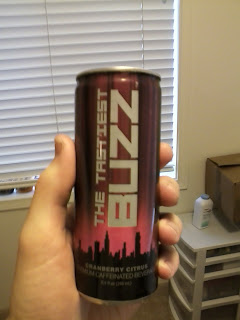 This review was brought to you through the contribution of Big Red Boots, editor-in-chief of possessedbycaffeine.com.  If you’re on my blog, chances are you’re familiar with his site; however, in the event you are not, you should definitely check it out.  His site is the one I went to before I started reviewing myself.

Not certain, probably about 80 mg.  I have serious doubts that there’s any more in there than that.

If I remember Big Red Boots’ review correctly, he found this at sort of an obscure store quite a while back—years, probably.  The company’s gone out of business (which is not a surprise, for reasons which we shall see), so if you’ve seen this once but haven’t since, you’re pretty well out of luck.

Okay—I can’t stand this packaging job.  It’s like the Battlefield Earth of energy drink cans—everything about this screams that the people who brainstormed and formulated it thought the world of it, but did not have a clue what they were doing.  First of all, the name—‘The Tastiest Buzz’?  You expect me to take that seriously?  Second—if you’re going to name it something so ridiculous, why not at least employ a backdrop befitting the name?  Why on earth would you go with a sunset (I’m guessing—what else could a maroon sky be?) cityscape?  I mean, I like sunsets and cityscapes as much as the next guy—but the cheap, wholly unrelated graphic kind of compounds the silliness (tilting your camera in every shot doesn’t make your film artistic, either).  Third—shrink-wrap!  I freaking hate shrink-wrap!  In the case of this drink, it is the nail on the coffin—your great idea wasn’t so great that you could get something actually printed on the can.  Worst thing is, it only goes south from here.

I don’t have the foggiest what they were going for here.  The first taste is almost cranberry-ish—but then it metamorphosizes in your mouth, and subsequent sips are not the same.  My best guess is bitter (not even the medicinal kind—it’s ickier than that), watered-down cheap cherry flavoring—which is unfortunate, because this is supposedly ‘cranberry citrus.’  In any event, it is really bad—one of the most miscalculated, badly-executed flavors I’ve ever had.

Maybe it’s the fact that my can is years old, but this hardly delivered a noticeable boost.  That’s 0 for 2—not tasty, not buzzy.

Effective (kinda) for an hour and 45 minutes.

Well—that’s one less can of The Tastiest Buzz in the world, and I think I have done the latter a service.  This was a really bad drink, and I seriously doubt it will be missed.