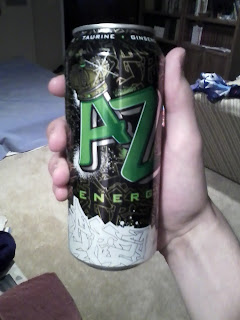 I’m going to give AZ Energy the benefit of the doubt and classify it as “bothersome” to find rather than “difficult”—I found it at a Dollar Tree store near where I live, and I’m not certain whether it’s a staple there or if it’s something that you find there only on occasion (Big Lots style).

I’ve never looked at an energy drink can and thought “bling” before, but that about sums it up for AZ Energy—this thing has the look of a dance club, with black and gold crackle in the background, ice in the lower foreground, and a bejeweled, graffiti-style logo front and center.  I will say this much about it—it doesn’t look like it belongs at a Dollar Tree store.

I do have one complaint about it, however, and it’s enough of a problem in my mind that I’m willing to dedicate a paragraph to it.  I bought this energy drink and its low-carb counterpart together, and when I took a good look at them, I realized something—the logo of the original is a sort of poison green, and the logo of the low-carb version is light blue.  If that sounds familiar to you, it’s because it’s the exact same thing Monster does with their original and low-carb drinks.  This might not be a problem for some, but to me, it does send out the idea that Arizona’s cranked out a couple of Monster imitators—which I’ve had in quantities enough that it killed a lot of the excitement I had at finding these two drinks.

Chances are this will turn out to be either your favorite or most hated energy drink.  Honestly, I’m still hanging in limbo with regards to it—I should probably pick up another can of each and see what I think the second time around.  In any case, I’m going to refrain from further commentary as far as judgment is concerned.  You’re just going to have to try this one for yourself.

Even if I’m kind of iffy on the flavor, I’m much more certain on my feelings for the kick.  This is a classic energy drink buzz—i.e. the sort of archetypal phenomenon you hope for when you pick up a new energy drink.  It’s not the sort of thing that’s all that complex or difficult to describe.  It’s just a straight-up caffeine buzz, and was a lovely surprise from a drink that had me feeling apprehensive from the beginning.

Last cool thing to mention with regards to the kick is the longevity—AZ Energy’s effects don’t taper off much at all over the course of its duration; you’re feeling it as much after four hours as you did fifteen minutes after you finished it.  After the fact, the tapering off is a little sharp, but not so steep that it ends in a discernable crash.

Just try this drink.  That’s all I need to say.  If you can find it, try it.  Love it, or hate it, or whatever.  But do at least try it.  Like I said, this may very well turn out to be your favorite energy drink.  But if not…well, at least you have a heck of a kick to look forward to, assuming that you finish the can.